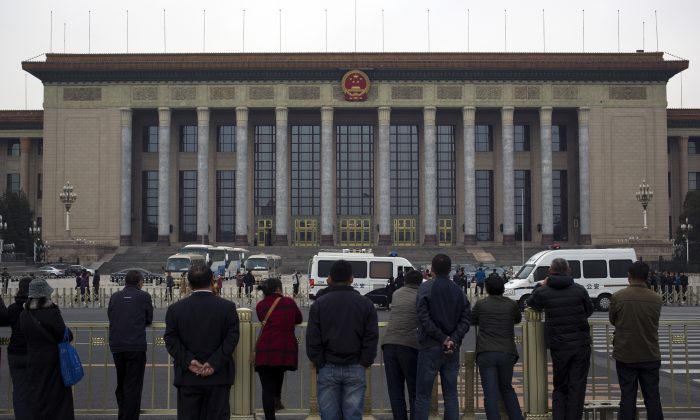 People watch as police officers check visitors in front of the Great Hall of the People during a gathering of the 205-member Central Committee's third annual plenum in Beijing, China Saturday, Nov. 9, 2013. The watchword for the Chinese Communist Party’s Third Plenum of the 18th Central Committee has been “reform.” (AP Photo/Andy Wong)
China

Why the Third Plenum Will Not Bring Real Reform to China

The watchword for the Chinese Communist Party’s Third Plenum of the 18th Central Committee has been “reform.” The plenum—a gathering of approximately the top 400 members of the Party—was moved from the symbolic center of power in Beijing in the Great Hall of the People to the Jingxi Hotel on the city’s outskirts precisely to make a point about reform.

In the Jingxi Hotel former paramount leader Deng Xiaoping led the plenum in 1978 that launched the policies of reform and opening up that would transform China’s economy. Facing an economy on the verge of imploding and a collapse in the Party’s legitimacy, the CCP’s leadership wanted to borrow the prestige of the 1978 event and promise the Chinese people real change would come to China.

The leadership needed to sell the hope of such change to the Chinese people because of the depth of the crisis facing the Party. However, the Party’s history has been one of repeated crises and repeated promises of new hopes that somehow are never realized.

In 2004 Epoch Times published an editorial series that explains why today’s promise of reform will also never be fulfilled.

Here is what the “Nine Commentaries on the Communist Party” has to say about the possibility of the CCP achieving real reform:

Throughout history, whenever the CCP encountered crises, it would demonstrate some traces of improvement, enticing people to develop illusions about the CCP. Without exception, the illusions were shattered time and again.

Today, the CCP has pursued short-term benefits and in doing so has produced a show of economic prosperity that has once again persuaded the people to believe in fantasies about the CCP.

However, the fundamental conflicts between the interests of the CCP and those of the nation and the people determine that this false prosperity will not last. The “reform” the CCP has promised has one purpose—to maintain its rule. It is a lame reform, a change in surface but not in substance.

Underneath the lopsided development lies a great social crisis. Once the crisis breaks out, the nation and the people will suffer once again.

With the change of leadership, the new generation of CCP leaders had no part in the communist revolution, and therefore have less and less prestige and credibility in managing the nation.

Amid the crisis of its legitimacy, the CCP’s protection of the Party’s interests has increasingly become the basic guarantee for maintaining the interests of individuals within the CCP. The CCP’s nature is selfish. It knows no restraint. To hope such a Party might devote itself to developing the country peacefully is wishful thinking…

Communism has been defeated globally and is doomed to become increasingly moribund. Nevertheless, the more corrupt a thing becomes, the more destructive it becomes during its dying struggle. To discuss democratic improvements with the Communist Party is like asking a tiger to change its skin.

“Nine Commentaries on the Communist Party” has spoken directly to the Chinese people, thoroughly laying out for them for the first time the nature and the history of the CCP. The “Nine Commentaries” sparked a movement to renounce all ties with the Party and its affiliated organizations. To date, almost 150 million Chinese have done so.