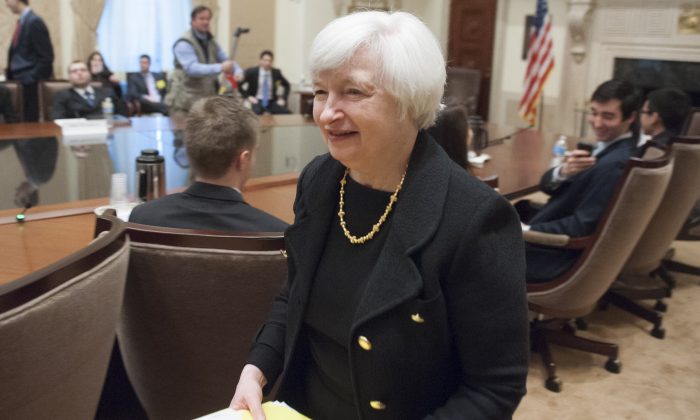 Federal Reserve Board Chair Janet Yellen in the Board Room at the Federal Reserve in Washington, D.C., Dec. 2, 2014. (Saul Loeb/AFP/Getty Images)
Opinion

Federal Reserve policymakers meet Tuesday and Wednesday to discuss when to raise interest rates and how they will communicate those intentions without upsetting financial markets or the economic recovery. Unfortunately, the Fed is constrained by its own past missteps, and its credibility is at stake.

Short-term rates have been near zero since 2008, and along with quantitative easing—the Fed’s purchases and continued holdings of long-term bonds—those low rates have held down the whole structure of rates on bonds, mortgages, and consumer loans to arbitrarily low levels, and imposed significant distortions on the economy.

Low rates discourage bankers from lending to businesses that create jobs, because they fear being stuck with low-yielding assets when the rates they must pay to keep deposits could go up a lot in the future.

Instead, cheap money encourages Wall Street speculators and bankers to gamble in foreign exchange and commodities markets, and to engage in similar activities of dubious economic value, to continue paying multimillion-dollar bonuses.

In addition, low rates have inflated prices for agricultural land, stocks, and junk bonds, and homes in tonier neighborhoods such as Manhattan and San Francisco.

Seen in these terms, higher interest rates might actually be more beneficial to instigating growth by eliminating perverse incentives and the terrible misuse of capital for speculative, unproductive purposes.

Apparently, Fed Chair Janet Yellen’s alma mater, Pembroke College, didn’t teach what the rest of us learned in Economics 101—that easy money can do little to boost economic growth when the economy has a great deal of slack.

With one of six men between the ages of 25 and 54 without a job, the U.S. economy has more slack than a six-foot clothesline hanging on poles two feet apart.

With Wall Street now hooked on low rates, the Fed can’t raise rates abruptly. It must telegraph intentions in advance, to permit big campaign contributors to get their risky portfolios in order.

When the Fed policymaking committee meets, it will once again debate dropping from its policy statement the assurance that it will hold down short rates for a “considerable time,” and replacing it with language indicating it will still be patient about timing. That would reinforce expectations that the Fed will raise rates in June or July.

The problem is that the recession in Europe and slower growth in China and other developing countries could push oil prices even lower and derail the boom in American production and recent acceleration in U.S. growth. And although low interest rates might not be helping growth much, those must be withdrawn when economic prospects are brightening, not growing darker.

Repeatedly, Fed policymakers have been too optimistic in their forecasts and were forced to delay ending the central bank’s bond purchases, and now the same may prove true for raising ultralow interest rates.

The Fed could try genuine candor. It should simply tell markets and Americans that low interest rates have served their purpose and that if the economic expansion continues, it will begin raising interest rates in June.

2015 is the year to get something done, because in 2016 the presidential election will cloud Yellen’s judgment.

During the midterm elections, she inappropriately sided with Democrats by saying that widening income inequality might be inconsistent with American values, when the party known for mule-headed economics was campaigning on issues such as raising the minimum wage.

Unfortunately, that behavior casts a great shadow on Fed policy independence and should be the focus of great attention by a Republican Congress.

Rates need to go up for both economic and political reasons—the sooner the better.