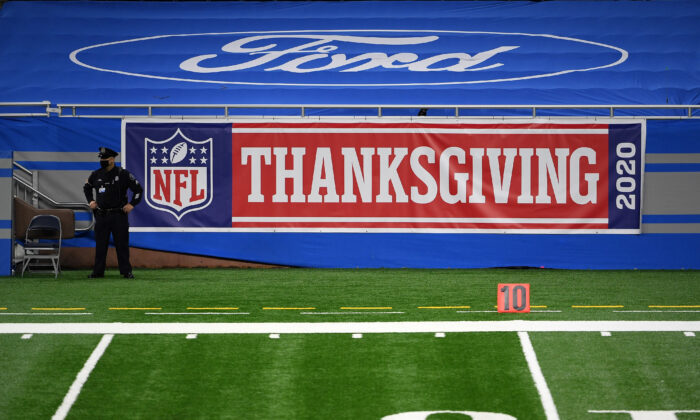 A detailed view of a Thanksgiving sign prior to a game between the Detroit Lions and the Houston Texans at Ford Field in Detroit on Nov. 26, 2020. (Nic Antaya/Getty Images)
NFL

Many families have Thanksgiving Day traditions throughout the United States, which could include watching National Football League games. A total of six NFL teams are now featured annually on the holiday, with two of them playing every year.

Dating back to 1934, the Detroit Lions have played in an annual Thanksgiving Day game. The lone exceptions were the 1939 through 1944 seasons that weren’t played due to World War II.

The game was created by Lions owner G.A. Richards as a way to increase attendance and media hype for the team. Richards purchased the Portsmouth (Ohio) Spartans and moved them to Detroit prior to the tradition beginning.

The first Thanksgiving Day game was watched by over 26,000 live fans.

Similar to the Lions, the Cowboys saw the holiday as a way to create more national media attention for the team.

The Lions created the concept and the game pre-dates the Super Bowl and many of the NFL teams being created, which makes tradition the biggest reason why the Lions and Cowboys play in their respective games annually.

The Cowboys have had better success in their games, holding an all-time record of 31–21–1.

While they don’t play every year, two other teams that have been largely featured are the Bears and Green Bay Packers who hold all-time records of 19–5–2 and 14–14–2, respectively.

The Jacksonville Jaguars are the only NFL team to never play in a Thanksgiving Day game. The Browns, Cincinnati Bengals and Tampa Bay Buccaneers have never won a game on Thanksgiving Day.

The 2021 Thanksgiving Day games are

People who attend the Bears and Lions game can collect a NFL NFT from Ticketmaster, a unit of Live Nation Entertainment.