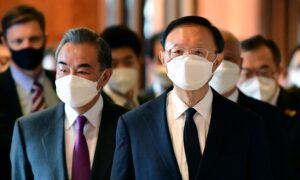 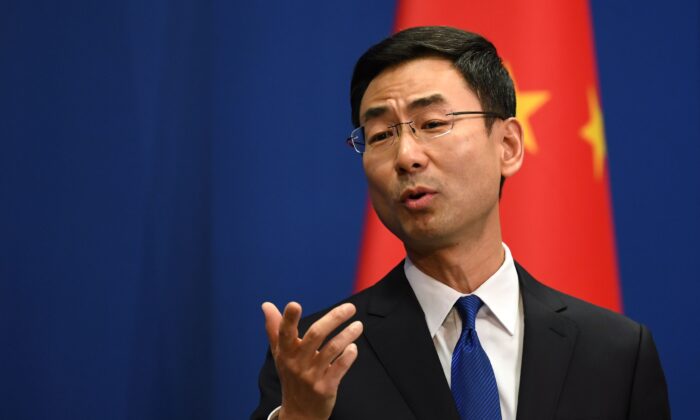 Why the CCP Is Implementing ‘Wolf Warrior’ Diplomacy

Recently, the Chinese Communist Party’s (CCP) “wolf warrior diplomacy,” an aggressive and confrontational approach CCP diplomats are using to defend the CCP’s interests, has come under the international spotlight.

Starting from the Alaska talks on March 18, the CCP’s so-called “wolf warriors” ignited a new round of diplomatic attacks.

On March 18, Yang Jiechi, a member of the CCP’s Politburo and director of the Foreign Affairs Office, “denounced” the United States in Alaska, on U.S. territory, elevating the tactic to the highest diplomatic level. Some of the CCP’s propaganda organs used the word “denounce” in their reports to describe Yang’s 17-minute speech at the high-level talks between China and the United States.

The CCP’s embassy to France, to everyone’s surprise, called Antoine Bondaz, a French scholar and China specialist, a “crazed hyena” and an “ideological troll.” It claims on its official website that “if there are wolf warriors, it is because there are too many mad dogs that are too fierce.”

The term “wolf warrior” was used by the CCP following the release of an ultranationalistic Rambo-style movie franchise in China of the same name. CCP diplomats who use this approach appear brazen and speak in an aggressive manner and are excessively offensive, threatening, and incendiary.

But this is only a superficial front. Since the outbreak of the U.S.-China trade war in 2018, the CCP has been in deep trouble. The 2019 Hong Kong protests against the extradition bill further exposed the evil nature of the CCP. The global pandemic of the CCP virus, commonly known as the novel coronavirus, plunged the CCP into unprecedented international isolation in 2020. By 2021, the overall crisis of the CCP will deepen still further.

The reason why the CCP tries so hard to look powerful, mighty, and domineering is, in fact, to cover up its own weakness and to intimidate its opponents with a false air of supremacy so that the international community will not push back.

Through a complex web of illusions, I think there are at least three reasons why the CCP uses its diplomats to attack all sides.

Shifting International Blame for the Spread of the CCP Virus

By April 4, 2021, more than 130 million people had been infected and 2.88 million had died in 192 countries worldwide. This is the biggest calamity that the CCP has brought upon the world.

Since March last year, civil groups, industry organizations, and local governments in the United States, the United Kingdom, Italy, Australia, India, Egypt, and many other countries have launched joint lawsuits against the CCP demanding compensation.

If the United States leads other countries to hold the CCP accountable for the global pandemic, the CCP will not be able to bear the weight.

The CCP’s violation of human rights has targeted many groups, including Uyghurs, Falun Gong practitioners, Christians, citizens of Hong Kong, Chinese human rights lawyers, victims of the P2P lending crisis in China, truth-telling university professors, and many others.

Falun Gong, also called Falun Dafa, is a spiritual practice rooted in Buddhist tradition and comprises five exercises and teachings based on the principles of truth, compassion, and forbearance, according to its official website.

The CCP used the persecution to create and perfect more than 100 types of torture on Falun Gong practitioners, creating the worst human rights disaster of the 21st century. The persecution continues to this day.

This new wave of lawsuits against Jiang began on May 1, 2015, when the Supreme People’s Court implemented a new “Registration System Reform,” which stipulates that all criminal complaints must be registered with the court once received, according to Minghui.

For 22 years, in many countries members of parliament, government officials, experts and scholars, human rights lawyers, the World Organization to Investigate the Persecution of Falun Gong (WOIPEG), and the independent China Tribunal in London have been pursuing justice over the CCP’s persecution of Falun Gong.

In particular, the CCP’s live organ harvesting (pdf) of Falun Gong practitioners is the most brutal crime against humanity since the Holocaust in the 1930s.

In the Nuremberg trials after World War II, 12 Nazi war criminals were sentenced to death.

Once Jiang is brought to trial, he is sure to face the heaviest sentence.

The arrogant performance of the CCP’s wolf warrior diplomats gives many Westerners who do not know the truth about the CCP the impression that the CCP is strong and powerful, when in fact the CCP is very weak internally.

The CCP’s corruption of China was greatly accelerated with Jiang’s persecution of Falun Gong.

On the one hand, Jiang connived at his son Jiang Mianheng’s business ventures and his leading the children of officials at all levels across the country to do business. On the other hand, Jiang promoted and reappointed a large number of seriously corrupt individuals, turning the CCP officialdom into a mass market for money, power, and sex.

Two of Jiang’s most important cronies, Xu Caihou and Guo Boxiong, vice-chairmen of the CCP’s Central Military Commission (CMC), are the most corrupt officials in the CCP’s military. The CCP does not dare to make public the amount of money they have embezzled, because the CCP is afraid that once the amount is revealed, the soldiers would rebel.

The CCP’s official mouthpiece, Xinhua, reported on March 10, 2015, what Yang Chunchang, a major general of the CCP’s Academy of Military Sciences, said: “It is well known to the general public that, in the military, including the armed police and the army, there are price codes for the CCP’s membership, promotions to be a platoon leader, a company commander, a regiment commander, or a division commander.”

The CCP has been relying on oppression and deception to maintain its rule. However, the awakened Chinese people have been resisting CCP tyranny in various ways, which makes the CCP very uneasy.

Therefore, the CCP’s wolf warrior diplomats strike on all sides, blaming external factors for domestic problems caused by the CCP’s severe corruption, and inciting patriotic sentiments among the brainwashed at home with the intention of transferring blame for the domestic crisis to foreign countries.

The original words of Karl Marx in “The Communist Manifesto” are as follows: “The communists disdain to conceal their views and aims. They openly declare that their ends can be attained only by the forcible overthrow of all existing social conditions. Let the ruling classes tremble at a communist revolution. The proletarians have nothing to lose but their chains. They have a world to win.”

These words show that Marx hated those in power in all countries and regions of the world, hated all existing social systems, especially the capitalist system, and wanted to overthrow it by violence, blood and fire, and war.

This violent revolution has been passed on to the CCP, and has become the internal motivation for the CCP to deny universal values and to lash out with its wolf warriors.

The violence inherited by the CCP from Marx is demonstrated by what it has done during the 72 years since it took power. Over these years, the CCP has never stopped fighting. It fought with Chinese landlords, followed by capitalists and intellectuals. It also fought its own members, the so-called “capitalist roaders” in the party who had a tendency to follow capitalism. It fought with Soviet revisionism and then with American imperialism. The CCP has been fighting all the way until today.

It is also in the CCP’s genes to destroy capitalism in Hong Kong and Taiwan and to be at war with capitalist countries such as the United States, Japan, India, Australia, Britain, and Canada.

The end result of the CCP’s wolf warrior diplomacy will only provoke strong resentment from countries around the world, and finally accelerate the joint effort of all countries in the world to encircle the CCP.

Wang Youqun graduated with a Ph.D. in law from the Renmin University of China. He once worked as a copywriter for Wei Jianxing (1931–2015), a member of the CCP Politburo Standing Committee from 1997 to 2002.