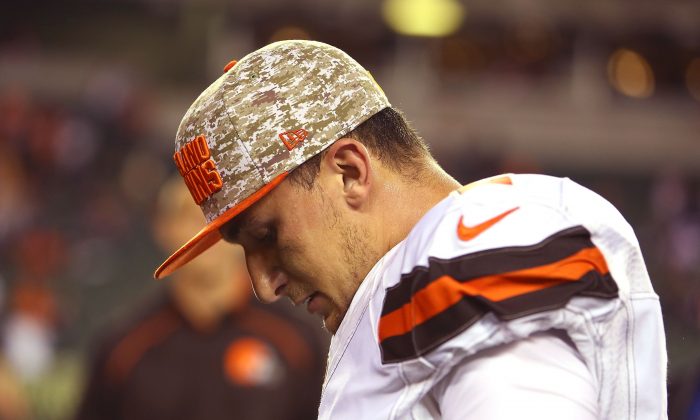 Johnny Manziel of the Cleveland Browns struggled greatly last season but has been much improved this year. (Andrew Weber/Getty Images)
NFL

Why the Browns Had No Choice but to Bench Manziel

Former Heisman Trophy winner Johnny Manziel is one of the most talented players in the NFL—just not the most successful one.

At his best, the quick-thinking, ever-scrambling quarterback has the unique ability to turn nothing into something on the field—a rare quality that separates him from most other quarterbacks.

He’s also one of the most frustrating players to root for, though, which probably made his benching even harder for Browns head coach Mike Pettine, who demoted him to third-string status on Nov. 24 after video surfaced of Manziel partying over the weekend.

But Pettine had no other choice. The Browns can’t have a repeat of Manziel’s performance last year when it appeared he hadn’t put in the necessary work off the field to be all he could be on it.

Before we jump all over Manziel for partying, though, let’s get one thing straight: Plenty of players like to party. Look at Rob Gronkowski of the Patriots. How often do we see photos of him living the high life in Las Vegas?

The difference is that the two-time All-Pro Gronkowski would appear to be balancing his party life and football life the way it should be done.

This is where Manziel seems to be lacking.

Last year, as social media signs pointed to the talented quarterback partying off the field, his on-the-field play was absolutely dreadful. The former Texas A&M star wound up with a 42.0 quarterback rating, going 18/35 passing for 175 yards, with no TD passes, 2 interceptions, and a fumble on the season.

For the Browns last year, watching their first-round pick struggle on the field couldn’t have been easy while struggling to a 7–9 record, knowing how much he could have helped them.

After spending 10 weeks last offseason in a treatment facility for unspecified reasons (we can only guess), the scrambling gunslinger looked like a new man on the field this year. Although he wasn’t the starter in week 1, he came on in relief of Josh McCown in the opener against the Jets and threw his first NFL TD pass in a much-improved performance.

Although he wasn’t anointed the starter at that point, he eventually got his big chance on Nov. 15 against Pittsburgh and shined going 33/45 passing for 372 yards with another TD pass in the loss.

This was the Manziel we all saw in college terrorizing opponents and then defiantly flashing his money sign afterward.

The Fast (and Unusual) Decline of Peyton Manning

Pettine clearly saw the improved performance as well and made him the starter going forward—until reversing his decision following the video evidence.

Manziel, by all accounts, didn’t get to this point this season by partying. He got there by putting in the work, and the results speak for themselves—an 88.4 quarterback rating, more than double last year’s rating.

But Pettine clearly knows that you don’t stop doing the things that made you successful once you become a starter. So when he saw him revert to last year’s antics, he had no choice. Maybe this will be the tough-love lesson Manziel needs to be all that he can be.