Why Patients Are Not Counted as New Virus Cases in Wuhan 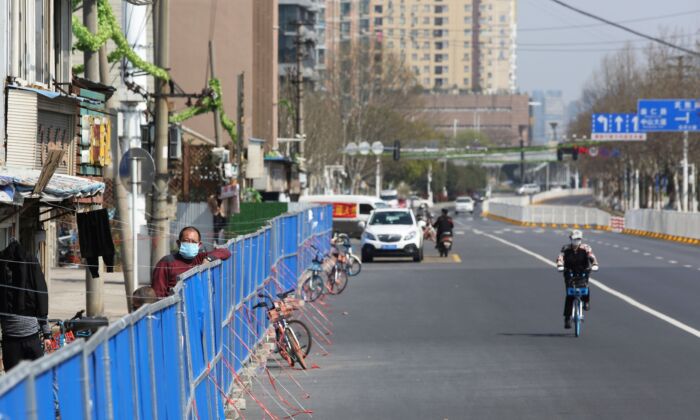 A man looks over a barrier set up to prevent people from entering or leaving a residential compound in Wuhan, China, on March 17, 2020. (STR/AFP via Getty Images)
By Nicole Hao

The city of Wuhan, ground zero of China’s epidemic, has reported no new CCP (Chinese Communist Party) virus infections for five consecutive days as of March 23.

Locals have reported a different scenario.

China’s National Health Commission reported on March 23 that there were no new domestic infections the previous day.

Since March 19, the commission has reported that nearly all newly diagnosed patients in China are imported cases—except one new domestic patient who was diagnosed in Guangdong Province on March 20.

The Guangdong health commission announced on March 22 that this patient is from Guangzhou city. He was infected with the CCP virus after contact with an “imported” patient who recently traveled to Istanbul, Turkey, the announcement said.

Meanwhile, Tu Yuanchao, deputy director of the Hubei provincial health commission, explained why there have been no new infections in Wuhan in an interview with state-run newspaper Hubei Daily on March 22. Wuhan is the capital of Hubei Province.

Tu said newly reported patients fall into two groups: those who recently relapsed after initially recovering from the disease, and those who test positive during nucleic acid testing for COVID-19 but don’t show symptoms.

“The relapsed cases were reported when they were first diagnosed. We won’t report them. At present, Wuhan city designates Jinyintan Hospital and Pulmonary Hospital to treat the relapsed patients,” Tu said.

Tu said that as authorities haven’t seen an example of a relapsed patient infecting other people, he didn’t think these patients could spread the disease to others.

For the second group of patients, Tu said the government wouldn’t count them as COVID-19 patients, but would “send them to the quarantine center for two weeks’ monitoring.”

Meanwhile, a Wuhan resident, the wife of a senior manager at a local bank, said that managers were recently informed of a new directive from authorities.

“The managers of Wuhan state-owned businesses received a notice saying they could only resume production after no new infections are reported in Wuhan for 14 consecutive days,” the source told the Chinese-language Epoch Times on March 23.

The source added that the local government wanted businesses to operate as soon as possible, and told government agencies they need to make it happen.

In an audio recording shared on Twitter by an overseas Chinese activist named Charles, the local Party boss of a neighborhood committee in Jiang’an district can be heard explaining to her community that families can’t go downstairs at the same time to pick up goods they ordered, as they should practice social distancing in order to stay safe.

“I told you guys, the situation is not good. Don’t trust the zero new infections. You won’t know the truth if you are not at the frontlines,” the Party boss said.

When a resident reminded her that she shouldn’t share this information, the Party boss answered, “If nobody tells the truth, we will become the second Li Wenliang.”

Li Wenliang is one of the eight doctors who first publicized information about a “SARS-like” outbreak in December 2019. Li was reprimanded by Chinese authorities. He died of the CCP virus on Feb. 7.

The Chinese regime has recently begun pushing propaganda that the virus outbreak could have originated in Italy, the hardest-hit country outside of China.

State-run newspaper Global Times reported on March 22: “The virus outbreak in Italy might have occurred earlier than in China,” adding that “the virus [spreading] in Italy might not have come from China.”

Meanwhile, Chinese trolls have begun posting on international and Chinese social media platforms, such as Twitter, Facebook, and popular Chinese app WeChat, claiming that China is the only safe country to be in to stay away from the virus.

Screenshots of multiple Twitter accounts show that they all tweeted the same message in Chinese, with only the country name changed. “The outbreak in France [also U.S., Canada, Spain, Italy] is out of control. I heard from friends who work at French [American, Canadian, etc.] hospitals that countless people are asking for help at hospitals every day, but they don’t have diagnostic kits.”

The Epoch Times refers to the novel coronavirus as the CCP virus because the Party’s coverup and mismanagement allowed it to spread throughout China and create a global pandemic.