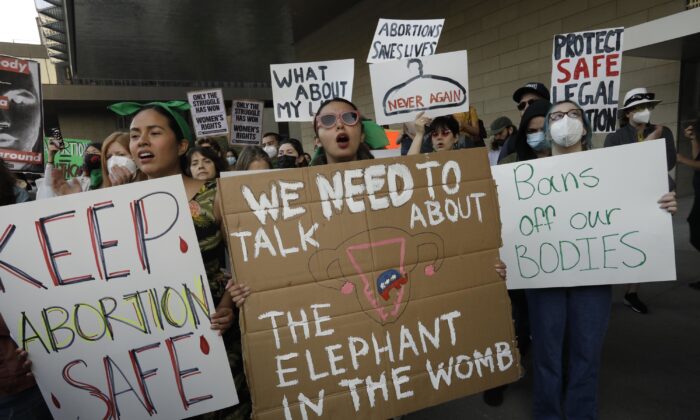 In an age when there appear to be fewer consequences for violating moral or statutory laws, demonstrators and protesters outside the Supreme Court building seem to have violated at least two federal laws. In the abortion-at-anytime Biden administration, which refuses to enforce immigration laws, it seems unlikely these laws will be enforced.

Here are excerpts from two federal laws should the Justice Department need to be reminded of them. 18 U.S. Code 1507 “Picketing or Parading” states, “Whoever, with the intent of interfering with, obstructing, or impeding the administration of justice, or with the intent of influencing any judge, juror, witness, or court officer, in the discharge of his duty, pickets or parades in or near a building housing a court of the United States, or in or near a building or residence occupied or used by such judge … shall be fined under this title or imprisoned not more than one year, or both.” (emphasis mine)

That seems clear, doesn’t it? Does language mean anything, or as liberals think about the Constitution, does the law say what judges intend it to say, or wish it had said, or would have said if they had written it?

A related law, 18 U.S. Code 1503, is titled “Influencing or injuring officer or juror generally.” It says in part, “Whoever corruptly, or by threats, or by any threatening letter or communication, endeavors to influence, intimidate, or impede any grand or petit juror, or office in or of any court of the United States…” can potentially be found guilty and face “imprisonment for not more than 10 years, a fine under this title, or both.”

How would the Justice Department characterize demonstrations and picketing outside the homes of justices? What label under existing law would they apply to picketers and shouters outside the Supreme Court building? If protesters were not trying to intimidate and influence conservative justices, why were they there? Shouldn’t the public expect laws to be enforced? They are for most average people who can be convicted by a court, spend time in prison and be forced to pay fines for violating those laws. Why is the debate about abortion and illegal immigration placed in a separate category in a government now dominated by Democrats?

The refusal to enforce laws equally has contributed to a decline in the public’s trust in our institutions.

A Gallup poll showed that between 2019 and 2020 when the pandemic took hold, faith in every institution surveyed—including public schools, the presidency, and Congress—dropped. Only the police showed an increase in confidence and remarkably that was when the left’s “defund the police” movement was at its height.

Today’s left is concerned only with outcomes that conform to their worldview. They were fine with striking down all state laws prohibiting abortion. They cheered when prayer and Bible reading were removed from public schools. Now that the shoe is on the right foot and not the left, the Court has become a pariah.

They can’t have it both ways, though they are trying.