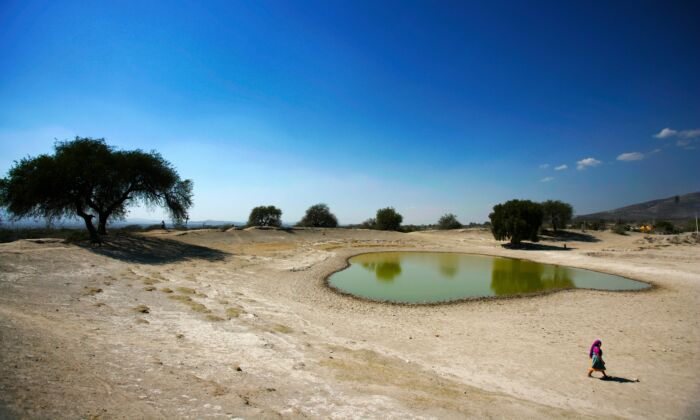 A Mexican woman skirts a Jaguey water hole, Feb. 4, 2006, near San Marcos Tlacoyalco. The Tehuacan Valley south-east of Mexico City has long experienced severe water shortages. Water resources in the area area are largely based on a weekly delivery by truck as well as collecting water from small pools known as Jagueys. This collected water was traditionally only used for animals but now more and more people are relying on it as a water source for crops and for drinking and bathing purposes. (Brent Stirton/Getty Images)
Americas

SANTA CRUZ, Bolivia—Nearly 31 percent of the world’s fresh water supply is in Latin America, which endures perilous scarcity in some areas due to decades of mismanagement, rapid population growth, privatization, and negligent agricultural practices.

There is enough water to meet the needs of the world’s population, yet its distribution is unequal. Also, much has been wasted, polluted, or poorly handled at an administrative level, according to the United Nations Educational, Scientific, and Cultural Organization (UNESCO).

Further, UNESCO admits there’s no actual shortage of fresh water so much as there is a misuse of the critical resource.

In Puerto Suarez, on the Bolivia-Brazil border, a man named Benito Ruiz gazed into a marshy green field that used to be a lake. He pointed to an old rowboat still tied up beneath a dry dock.

“Our lake is only seasonal now,” Ruiz told The Epoch Times, reminiscing about a time when commercial fishing opportunities in the town weren’t just a rainy season thing.

Not far down the road, cattle ranches dot the landscape as far as the eye can see. Farmers in the area use unregulated slash and burn farming practices to clear land for cattle, much of which is due to the escalated demand from China for beef exports.

The destructive agricultural practice creates a variety of side effects, including wildfires, soil erosion, water pollution, and drought.

Regardless, Bolivia’s socialist government endorses this method and quadrupled its annual beef exports to China as of 2020.

Diversion of water in the Pantanal region, which is the world’s largest freshwater wetland, for farming and ranching, is another contributor to a growing shortage of the resource.

Too Much Too Fast?

A similar problem exists in Mexico City, which was originally built on the all but vanished Lake Texcoco.

The city’s population exploded to more than 20 million in less than 50 years, prompting drainage of the surrounding lake to make room for the rapidly expanding population.

While officials scrambled to create more land, it left the city overly dependent on water brought in from far away reservoirs or underground.

Presently, more than 30 percent of what comes out of the tap in Mexico City arrives from distant lakes and rivers. The rest is drawn from an aquifer beneath the urban metropolis, which created a completely different problem.

The city is now sinking into the ground.

Parts of the urban hub are submerging by more than a foot per year, which makes it difficult to maintain the 60 year old water pipes supplying the populace.

The Mexican government has spent billions trying to manage the tangle of issues, leaving many residents reliant on trucks delivering non-potable water that’s only good for toilets and washing.

Yet even the truck delivery isn’t reliable or guaranteed.

Astonishingly, the city has more annual rainfall than London. Due to its location in a valley, it also has issues with flooding during heavy rains.

Such a stark contradiction has been blamed squarely on the mismanagement of corrupt officials.

“The water crisis is a crisis of governance, caused largely by corruption that is widespread throughout the sector,” Transparency International commented.

Upwards of 70 percent of the nation’s territory is arid or semi-arid and in those areas, there’s increasing pressure for more water to use in production and consumption.

“Several provinces had to dictate water emergencies to give priority to the use of human consumption,” Argentinian engineer Pablo Bereciartua told The Epoch Times.

Bereciartua, who is a board member of the Stockholm based Global Water Partnership, indicated his nation suffers from a complexity of factors affecting water scarcity.

Chief among those being drought.

Of the nation’s 23 provinces, eight are dealing with urgent water supply issues, including the famous wine region of Mendoza and Rio Negro, located in the popular recreational district of Patagonia.

Bereciartua says an important factor contributing to the dry conditions is the historically low water levels in the Parana River.

The Parana River, which is a vital resource for the nations of Paraguay, Brazil, Argentina, and Bolivia, has been experiencing a significant and localized drought for the past few years.

Interestingly the drought followed closely on the heels of an increased power output from Paraguay’s Itaipu dam, which began ramping up its production in 2016.

The dam is located directly on the Parana River.

Earlier this month Paraguay’s President Abdo Benitez announced that, thanks to the nation’s hydroelectric projects, their country was able to run on 100 percent renewable energy.

While many celebrated this “green energy” accomplishment, some experts point to mega dams as a major culprit in regional drought issues and decreased water levels in rivers.

A study on the relationship between water scarcity and dam projects by Ted Veldkamp at Vrije University in Amsterdam revealed that after $2 trillion spent on global dam initiatives in recent decades, the world was left with 23 percent less water.

The War On Water

Back in 2019 Chile’s climate conference in Santiago was inundated with chants of “water is a right, not a business, not a privilege,” by protesters.

The nation has one of the most privatized water systems in the world, dating back to the dictatorship of Augusto Pinochet and a water code established in 1981 that allows private companies to own and control the nation’s vast aquatic resources.

As a result residents and farmers now pay among the highest prices in Latin America for water access, creating a manufactured crisis.

Rodrigo Mundaca, agronomist and national spokesperson of the Defence Movement for Access to Water, Land and Environmental Protection, said that “theft is institutionalized” when it comes to the precious resource.

A report from Jan. 15 states that amid recent drought and scarcity, rights to water in Chile are being sold at “millionaire prices” to mining and agricultural companies.

Maria Catalina Espinoza, president of the Potable Water Union said, “There is water, but the businessmen have it.”

Bolivians fought a similar privatization effort in the arid city of Cochabamba back in February and April, 2000. The government granted consumption and sanitation water rights to an international consortium called Aguas del Tunari the previous September.

This triggered protests and violent clashes with local police against the subsequent hike in prices and access for farming in rural communities.

When the news spread sympathy groups in other areas quickly organized and the protests expanded, resulting in the infamous “Cochabamba water war.”

In the end, the Bolivian government canceled the contract with Aguas del Tunari and amended the legislation of Act No. 2029 over water rights and usage.

Ecological crises in the Amazon River basin are nothing new. However, 20 percent of the world’s fresh water can be found in this region alone, which covers an area roughly the size of the continental United States.

Peruvians battle with mining companies over the contamination of essential waterways that suffer from toxic byproducts dumped into them.

Much of the pollution comes from gold mining and oil drilling.

In 2017 a group of indigenous Achuar people crippled seven important areas of operation for petroleum facilities in Loreto Province. Demonstrators demanded justice for oil spills on their land and contaminated water.

On the other end artisanal gold mining remains the primary offender for mercury pollution in Amazonian rivers due to its use in the extraction process.

Gold mining in the region accounts for 10 percent of the world’s demand.

Consequently different organizations have called for the reduction of the use of the toxic element to prevent further health calamity.

The World Health Organization classifies mercury as one of the top 10 chemicals causing a major public health concern.

“The mercury pollution crisis in the Amazon is, unfortunately, both invisible and largely ignored despite growing evidence of the dangers,” said Jordi Surkin the director of the World Wildlife Fund’s Amazon Coordination Unit.