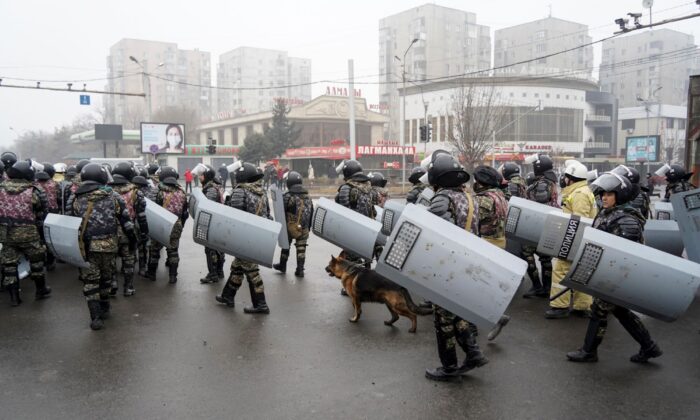 Why Kazakhstan’s Unrest Will Reverberate Around the Globe

Over the past several weeks, Kazakhstan has exploded into widespread civil unrest. The country is a critical Russian ally. This unrest has wide-ranging global implications and may affect the developing U.S.–Russia confrontation over Ukraine.

The unrest is fostering Russian fears that the United States and its allies are intent on creating “color revolutions” along its periphery and ultimately in Russia itself. It also has broad implications for the political stability of Central Asia and the other “stans,” as well as on Chinese policy in Xinjiang, China.

The violence has resulted in at least 164 dead, including about two dozen police officers, hundreds of injured people, and the arrest of more than 5,800 protesters. More than 100 banks and businesses were looted, and roughly 400 vehicles were destroyed. Almaty, Kazakhstan’s largest city and its cultural and economic hub, now resembles a war zone.

The demonstrations in Kazakhstan were triggered on Jan. 2, when the Kazakh government announced an almost doubling of the price of liquid petroleum gas (LPG) to 120 tenge, or roughly $0.24 per liter ($1.06 per gallon). In addition to using LPG for heating homes, it’s also widely used in Kazakhstan for fueling cars.

Anger at the price increases quickly morphed into calls for political reform and democratic elections, including direct elections of regional leaders instead of their appointment by Kazakh President Kassym-Jomart Tokayev. Demonstrations began in the city of Zhanaozen, Kazakhstan, but quickly spread across the country.

On Jan. 4, the Kazakh government announced that LPG prices would be rolled back by more than 50 percent to $0.11 per liter. Then, on the next day, Tokayev accepted the resignation of the Kazakh government. Internet service was suspended in many parts of the country and Tokayev announced that riot police would be deployed to dispel the crowds with tear gas and stun grenades and that they would have “shoot to kill” orders.

However, the protestors refused to disperse, briefly taking control of the airport and attacking and damaging government buildings, including the offices of the mayor of Almaty, the home of Tokayev, and the offices of the ruling political party, Nur Otan.

On Jan. 6, 3,000 Russian paratroopers arrived in response to a request by Tokayev to the Collective Security Treaty Organization (CSTO) for assistance. The CSTO is a collective security organization set up by Russia that includes several former Soviet states.

Tokayev claimed on Jan. 7 that domestic order had been restored by Russian troops acting in concert with Kazakh police and security forces and that the Russian military had taken over the administration of Almaty’s international airport.

Russian media outlets also reported that former President Nursultan Nazarbayev—whose nearly three-decade-long rule was marked by widespread corruption—had left the country along with his three daughters and their families.

On Jan. 8, the Kazakh government again claimed that order was being restored, although protests were continuing in Zhanaozen and continued to flare up in Almaty. On Jan. 9, Interior Minister Erlan Turgumbayev repeated the claim that order had been restored and announced that a “counter-terror operation is continuing in an attempt to re-establish order in the country.”

Kazakhstan is crucial to Russia, arguably as important to Russia’s continental defense as Ukraine and Belarus. It’s an integral part of Russia’s space program and defense establishment, as well as an indispensable source of uranium for Russia’s nuclear program.

The Baikonur Cosmodrome, Russia’s main space launch facility, is in Kazakhstan. A second cosmodrome is being built in Vostochny, Russia, located north of the Amur Oblast in the Russian Far East. Although the first launch occurred in 2016, the facility—which has been plagued by cost overruns and delays—isn’t expected to be fully operational until 2025. Currently, the facility can only handle Soyuz-2 type rockets.

Kazakhstan is also the world’s largest producer of uranium. It’s responsible for 40 percent of global uranium production, and it’s the primary supplier of uranium to Russia.

The Kremlin fears that anti-government violence in Kazakhstan could easily morph into ethnic violence and ethnic cleansing resulting in millions of Russian refugees streaming across the border into Russia.

The unrest in Kazakhstan has also fueled Russian fears that the United States and its NATO allies are determined to stage “color revolutions” along its periphery and ultimately within Russia itself. As in Ukraine in 2014, nongovernmental organizations (NGOs) were instrumental in organizing and helping to fund the organizations spearheading the domestic protests in Kazakhstan.

The Kremlin claims that many of these NGOs, such as the National Endowment for Democracy (NED), are “foreign agents” that are funded in part by the U.S. government and function as an arm of U.S. foreign policy.

In 2020, NED and its associated organizations received roughly $300 million from the U.S. government. Currently, NED supports more than 1,500 NGOs in more than 90 countries around the world. In 2020, NED spent approximately $1 million funding various groups that were promoting democracy in Kazakhstan.

Starting in 2017, the Chinese regime, in response to what it claimed was “combatting separatists and promoting deradicalization,” introduced a series of repressive measures against the Uyghur population in Xinjiang. It’s estimated that internment camps, designed to “deradicalize” so-called Uyghur extremists, now hold between 1 million and 2 million ethnic Uyghurs. Critics have charged that the campaign is part of a long-term effort to sinicize Xinjiang and eradicate the religious and ethnic identity of the Uyghur population.

According to a New York Times report, Chinese authorities systematically track virtually every aspect of Uyghur daily life. Activities that are deemed suspicious will typically lead to detention in an internment camp.

A pro-Islamic/pro-Uyghur government in Kazakhstan would cause enormous problems for China in Xinjiang and potentially fuel civil unrest among the Uyghur population there. Not surprisingly, Beijing has been quick to condemn the demonstrations in Kazakhstan as being orchestrated by the United States and its allies.

The unrest in Kazakhstan may abate over the next few weeks, but the deep-seated resentment against the government’s corruption and authoritarianism is unlikely to dissipate anytime soon. Kazakhstan will remain a powder keg primed to explode at the nearest provocation.

The unrest in Kazakhstan will continue to color Russian and Chinese calculations regarding both of their foreign policies to the other “stans” in the region, as well as their own domestic politics. Additionally, it will shape Russia’s policy toward Ukraine.

It will also underscore how fragile the stability of Russia’s periphery is and how Moscow’s attempts to bring the Near Abroad—the former states of the Soviet Union—under its economic, political, and diplomatic umbrella are deeply unpopular in those countries.

Simply put, what happens in Almaty is unlikely to stop in Kazakhstan, but will ripple broadly through the region with potentially explosive and highly destabilizing consequences.