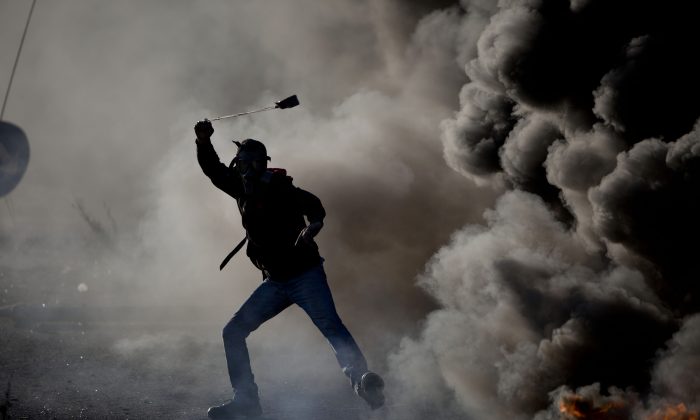 A Palestinian swings a sling during clashes with Israeli troops, in the West Bank city of Ramallah, on Nov. 13, 2015. (AP Photo/Majdi Mohammed)
Opinion

Disagreement on Rules of Engagement. Given their stark disagreement on various issues, each side insisted on rules of engagement that could serve their own strategic interests first. For example, Israel insisted that the negotiations must first consider its vital national security concerns, whereas the Palestinians wanted to negotiate borders first to establish the parameters of their state.

In addition, both sides have failed to delink the conflicting issues, arguing that nothing is agreed upon unless everything is agreed on at the same time. Moreover, by not setting aside, or “banking,” any conflicting issue over which they have reached an agreement, it made it difficult to make significant progress as every time they entered into new negotiations, they had to start from scratch.

One of the most daunting problems is the lack of trust between the two sides, as neither has made any effort to mitigate it.

Lack of Trust. One of the most daunting problems is the lack of trust between the two sides, as neither has made any effort to mitigate it. On the contrary, they have both made demonstrable actions on the ground such as building and expanding settlements, erupting into wanton violence, and engaging in public acrimony in ways that only deepen mistrust. Moreover, personal chemistry and communication, which could stimulate trust between Israeli and Palestinian leaders, was and still is absent.

Failing to Engage the Public. Both sides have failed to involve their respective publics in the progress (or lack thereof) in the peace process, invite support, and prepare their citizens to accept the inevitable concessions that will be required to reach an agreement.

Moreover, the press was left in the dark and was not allowed to witness or gauge any aspect of the negotiations to engender public discussion, thus leaving the public with little or no expectation or hope that the peace negotiations could in fact lead to an agreement.

Political Factionalism. Whereas a majority of Israelis and Palestinians (based on many polls conducted over the years) have steadily supported a solution to the conflict based on two states, political factionalism within both communities makes it extremely difficult to concede on this or any other issue.

Major opposition from political opponents who have different agendas, though they represent a smaller part of the overall population, have consistently scuttled the peace talks. The settlement movement in Israel and extremist jihadi groups among the Palestinians wield far greater political influence than their numbers warrant, and thus far have succeeded to dash any prospect for peace, justifying their refusal to accommodate the other.

Power Disparity in the Negotiations. Whereas Israel enjoys a preponderance of military and economic power and negotiates from a position of strength, the Palestinians are living under occupation with a limited ability to challenge Israel.

As a result, they have sought to balance their power relations at the negotiating table or prior to the commencement of the negotiations with Israel by demanding, for example, to freeze settlement activity or release Palestinian prisoners, to which Israel objected.

Lack of a Comprehensive U.S. Strategy. As the mediator, the United States did not follow a carefully constructed framework for the negotiations that could guide both sides to make the necessary concessions to reach an agreement.

Indeed, being that both Israel and the Palestinians often vacillated and changed course by design or circumstances, the United States (out of frustration) changed its strategic approach in response, thereby losing consistency and control over the negotiating process, which led to repeated failures.

No Consequence for Failure. Although the United States offered economic and security incentives for both to reach an agreement, it lacked a strategic approach and attached no repercussions for failing to reach an agreement. That is, the lack of a mechanism to punish either or both sides for failing to make serious progress made it possible to resist any pressure, knowing that they could do so with impunity.

Absence of bold leadership: There has been a serious absence of courageous and visionary leadership that could move against the political current for the sake of a larger purpose by making important concessions to each other to advance the peace negotiations.

Since the 1993 Oslo Accords, signed by Yitzhak Rabin and Yasser Arafat, neither side has produced a leader with the strength and conviction to take a risk for the sake of peaceful coexistence. This leadership malaise will have to be cured before a new round of negotiations begin, but is not likely to happen without intense and consistent external pressure.

The new international effort to resume the peace negotiations must not lose sight of the popular demand of the majority on both sides to live in peace, because on their own, they will not come to terms with one another.

The regional turmoil must not forestall the Israeli–Palestinian peace process; on the contrary, it should serve as the catalyst that could end one of the longest conflicts in modern history.

Past experiences also revealed that although some progress was made through U.S. mediation, the negotiations failed to produce an agreement and nothing indicates that the resumption of the negotiations under U.S. auspices would lead to different results.

As such, it has become increasingly clear that only international intervention would provide the practical channel for the peace negotiations and motivate or incentivize both sides to come to terms with the inevitability of coexistence.

The U.S. role is central to the success of these efforts, provided that Obama or his successor stop enabling Israel to pursue its self-destructive path by no longer providing Israel with unconditional political backing and economic and military support.

Indeed, the two-state solution remains the only viable option that allows for peaceful coexistence, on which any new initiative must be based.