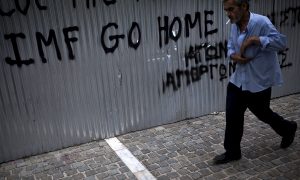 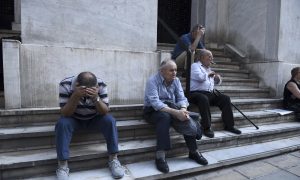 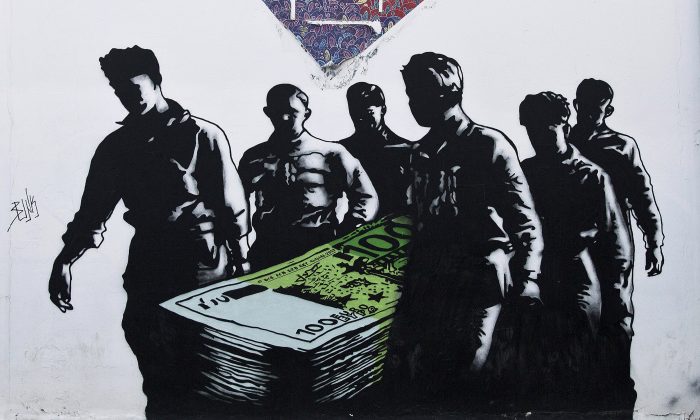 A graffiti artwork titled "Death of Euros" by French street artist Goin at the Athens School of Fine Arts, on June 17, 2015. Over the past five years of Greece’s economic depression, more and more paintings commenting on the country’s financial and social woes have appeared. (Petros Giannakouris/AP)
Opinion

Why Greece Won’t Take a Deal

Greece is in dire straits. As a Greek American, it hurts to watch.

Without emergency loans from its European partners, Greece will default on its debts and likely be forced out of the Eurozone. That means tougher times ahead for Greece, Europe, and international financial markets.

In exchange for a short-term loan, European powers led by Germany want the Greek government to impose brutal new austerity measures on its people. So why won’t Greece take the deal?

First, some background: Past Greek governments are largely to blame for the country’s fiscal woes.

In 1981, Greek Prime Minister Andreas Papandreou famously told his finance minister to “spend it all.” And that’s exactly what he did.

Greece became the first European country to allow all workers to retire with a full pension at the age of 55. A worker in a “dangerous industry” could retire even earlier. But “dangerous industries” ended up including everybody from hairdressers to radio disc jockeys.

In the meantime, the government hired everybody who wanted or needed a job. The public sector ballooned to unsustainable levels, and practically everybody was retiring early at full pension.

Later on, conservative governments jumped on the bandwagon too, handing fat government benefits to their supporters. Tax evasion ran rampant and the entire political system was corrupted.

The system was bound to collapse, and collapse it did. A few years ago, Greece’s neighbors and the International Monetary Fund loaned the country money to make ends meet.

But instead of eating the losses on their banks’ bad investments, the Europeans—and especially the Germans—demanded harsh austerity cuts that shredded Greece’s social safety net, gutted the public sector, and plunged the country deeper into despair.

Half of young Greeks are unemployed, and over 40 percent live in poverty. Is default really worse than letting Europe squeeze the country dry?

Fed up with the resulting poverty and unemployment, Greeks rejected their mainstream political parties in the last election and replaced them with the left-wing Syriza party. Led by Prime Minister Alexis Tsipras, Syriza campaigned on protecting Greece’s now-huge underclass from Europe’s dictates.

Why would the Greeks risk losing everything by not continuing with a well-defined program of pension cuts and layoffs?

The answer isn’t hard to understand.

First, Syriza rejects balancing the budget on the backs of the poor. Over 40 percent of Greeks now live at or under the poverty level. Middle-class people who worked all their lives have been thrown out of their jobs and have no hopes of getting another. Unemployment for young Greeks hovers around a whopping 50 percent.

Tellingly, suicides in Greece are up over 35 percent since the economy fell apart in 2009, and a “brain drain” of educated professionals to other countries is running apace.

Second, Europeans are ignoring the concept of saving face. The European ultimatum to Greece doesn’t respect the country’s election results or allow the government to claim even a partial victory. Add in the Greeks’ lingering resentment toward the Germans over Nazi atrocities in World War II, and you get an even more difficult situation.

There’s still hope for a last-minute breakthrough. If that doesn’t happen, though, the money will dry up and the Greek economy will fall further apart. Yet compared to endless austerity, that might not be the end of the world.

It may be ugly for a while: Stock markets will slide, Greece will have to re-invent its currency, and the economic depression Greece has endured may last several years longer. But the Greeks will survive, and so will everybody else.

It’s not just about the money. It’s about pride.

John Kiriakou is an associate fellow at the Institute for Policy Studies. He’s a former CIA counterterrorism officer and former senior investigator for the Senate Foreign Relations Committee. This commentary is a joint publication of FPIF.org and OtherWords.org