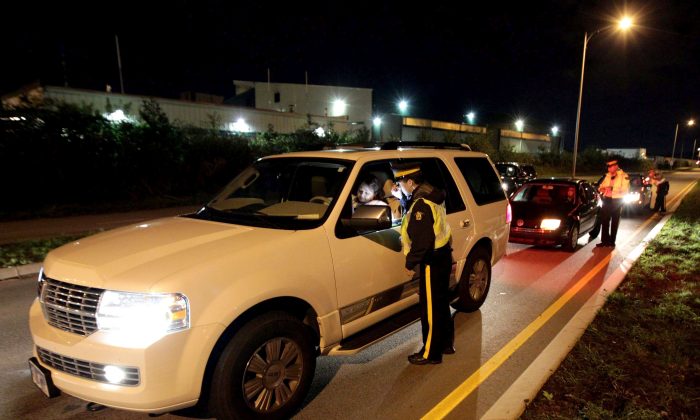 RCMP officers look for impaired drivers during a roadside check in Surrey, B.C., in a file photo. (The Canadian Press/Darryl Dyck)
Viewpoints

Why Gladue Indigenous Sentencing Should Go

A recent Ontario court decision, striking down the mandatory conviction for impaired driving of a woman simply because she was Indigenous, highlights the urgent need to re-examine the wrong-headed Gladue sentencing principles, which apply exclusively to Indigenous offenders and allow for light sentences.

The woman in question had a blood alcohol level three times the legal limit. Her reckless driving included her car hopping a curb, flying through the air, and landing on a sidewalk. It is only lucky that a pedestrian was not in her way.

A non-Indigenous person would surely have been convicted in this case; the Indigenous woman should have received the same treatment. However, the judge gave the woman a conditional discharge and two years of probation.

The group Mothers Against Drunk Driving has campaigned against impaired driving since 1980. In that year, Cindy Lightner’s daughter, Cari, was killed by a drunk driver with multiple convictions. Mrs. Lightner vowed that her daughter’s death would not be in vain and set out to make driving under the influence a true crime, which it should rightly be.

At that time, drinking and driving was still treated as a minor matter—almost like a traffic infraction. People would even make jokes about how much liquor they could consume and still drive safely. Comedians like Dean Martin made their careers joking about inebriation, and movies regularly portrayed people drinking in bars and then taking off in their vehicles.

But Mrs. Lightner and her colleagues were committed to change that mindset. She and several other determined mothers relentlessly hounded lawmakers and refused to let a “good old boys” network deter them from their goal. Their main message was that all drunk drivers must be held accountable for posing a life risk to those around them and hence committing a criminal act.

As a result of their efforts, the number of drunk-driving related deaths is far lower today than it was years ago—and, thankfully, so is the number of grieving mothers.

The idea behind the Gladue protocol may seem noble—to reduce a grossly disproportionate incarceration rate for Indigenous people. Making up about 5 percent of the Canadian population, they represent at least 27 percent (and up to 75 percent in Manitoba and Saskatchewan) of the imprisoned population. However, the simplistic response of lightening the sentences, or not charging Indigenous people where others are charged, causes more problems than it solves.

While it was hoped that Gladue (initiated in 1999) would result in fewer Indigenous people in jail, the opposite has occurred. The number of Indigenous inmates has increased by eight per cent over the last 10 years. Noted economist and social theorist Thomas Sowell, in one of his essays, shows how crime rates tend to increase following the imposition of “kinder, gentler policing.” He argues persuasively that blaming excessively high crime rates on “racist cops” or systemic discrimination leads to fewer charges being laid and lighter sentences being imposed, but—quite perversely—more crime.

There is a myriad of complex factors explaining why more crimes are committed by Indigenous people than by non-Indigenous, and it is simply wrong to emphasize systemic racism as the key factor.

The main reason why this is wrong is because it gives people preferential treatment by reason of their race, which destroys the idea of personal value, individual responsibility, and accountability. Of course, a judge should take a person’s specific circumstances into consideration when sentencing, but the judge still ought to hold the offender accountable for his or her behaviour.

Race and ethnic considerations should be absolutely irrelevant in a court of law. When an Indigenous man who has brutalized an Indigenous girl is held to account for his crime consistent with Gladue, a miscarriage of justice occurs.

In that case, the message to the victim is that, in the eyes of the law, her personal worth is less than the value of other victims. The message to the Indigenous offender is that the criminal justice system is biased, and he can continue to commit crimes with relative impunity.

As for the message to the girl’s family—similar to the grieving mother of a drunk driving victim—it is that playing racial politics is considered more important than her child being hurt or killed.

Gladue is, and has always been, a bad legal practice despite its seemingly righteous aim.

In a democracy, the granting of equal rights to its members is a foundational principle. So should an equal expectation of personal responsibility for all, regardless of race.

Brian Giesbrecht is a retired judge and a senior fellow with the Frontier Centre for Public Policy. Masha V. Krylova is a Master’s student at the University of Manitoba.