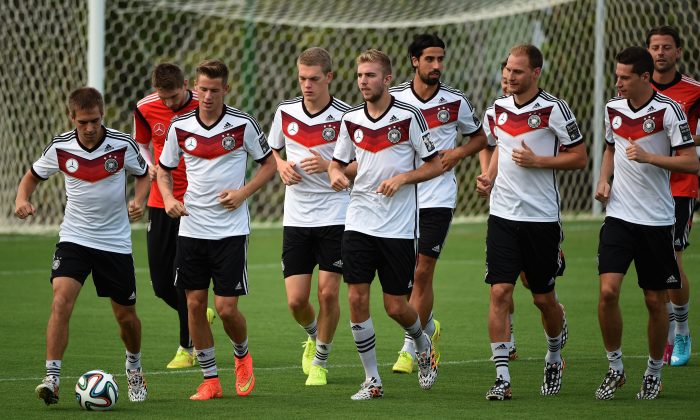 Germany´s players warm up during a training session in Santo Andre on July 10, 2014, ahead of the final match Argentina vs Germany on July 13, during the 2014 FIFA World Cup football tournament. (PATRIK STOLLARZ/AFP/Getty Images)
Soccer

Germany head into the World Cup final as favorites after an emphatic 7-1 humiliation of hosts Brazil.

Here are five reasons why Germany will win World Cup 2014.

Coach Joachim Loew may have finally cracked it.

Germany began a footballing revolution in the early 2000s after loses in World Cup 2002 and a 5-1 defeat against England.

Since then, Germany have acquired a spectacular counter attacking edge in the 2006 World Cup, and developed a more patient, short passing, possession-based aspect in the 2010 World Cup and 2012 Euros,

Yet the team has always been criticized for defensive naivete, and their inability to properly control a game.

In this World Cup, however, Germany has finally gained some defensive solidity to go along with their counter attacking and passing virtues.

Germany play a Spanish/Pep Guardiola style high-pressing game, with the forwards and midfielders harrying opponents in their own half, and rely on goalkeeper Manuel Neuer to play a sweeper-keeper role in the event their high backline is breached.

The 7-1 victory against Brazil is the best example of the new German defensive/offensive efficiency.

And in their quarter final match against France, Germany showed that they are able to control proceedings, and win a close, cagey encounter.

Thomas Mueller, Miroslav Klose, and Andre Schurrle are not the flashiest players, but these forwards get the job done.

At age 36, Klose is still deadly from anywhere inside a 12-yard range, and will cherish his final chance to add to his already record breaking 16 World Cup goals.

Like Klose, Mueller can read the game superbly, and always appears at the right attacking positions to finish off chances.

Schurrle is the most direct of the trio, constantly running at defenders, and will provide the much needed boost from the bench in the second half to ghost pass tired defenders and score.

The three men currently have 10 goals between them.

Ironically, this German team are filled with stars — who wouldn’t want Bastian Schweinsteiger, Philipp Lahm, Mesut Oezil, Toni Kroos, Mats Hummels in their team? — but they lack a genuine, match-winning super star in the form of a Lionel Messi and Cristiano Ronaldo.

Without any super stars, the German team functions as well, a team.

The Germany-Brazil game provided numerous examples of how the players look for team mates in better goal scoring positions when they could have taken shots themselves, and ended up with empty nets and simple roll-ins.

Relying on selfless team play instead of one individual to show up at crunch time has been, and will be, the difference for Germany.

This German team feature a bunch of well-rounded individuals, and this has been a key difference in head-to-head clashes.

From goalkeeper all the way to the strikers, everyone is comfortable on the ball, and can pass it well.

Defenders Philipp Lahm, Mats Hummels, and Jerome Boateng can all defend and bring the ball upfield if required, and upfront, the likes of Miroslav Klose, Thomas Mueller, and even Mesut Oezil have shown great determination in trekking back to make tackles and win the ball for the team.

The team defends and attacks as a whole, which makes the Germans a very balanced and deadly footballing unit.

There is an atmosphere of mutual respect and camaraderie in the team now, according to Raphael Honigstein of ESPN FC.

This was something that was lacking in Euro 2012, where some team members let their egos get in their way, and it badly affected team spirit.

A united German team in the mind and on the pitch will be exactly what is required for a united Germany to win the World Cup.