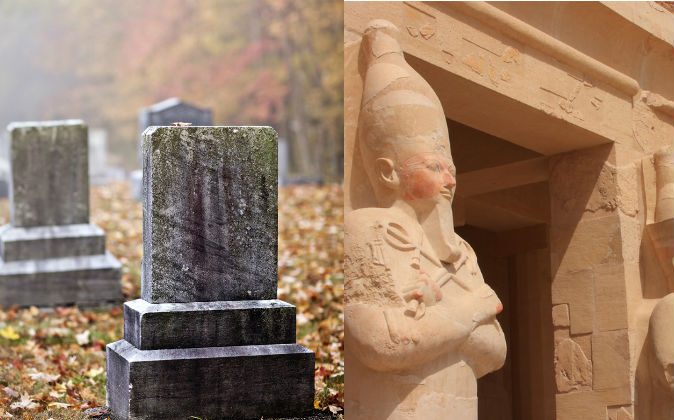 Many cultures throughout history have oriented their temples, graves, and prayer rituals toward the East. (Shutterstock*)
Beyond Science

Why Do Graves Face the East?

Throughout history, across many different cultures, people have expected salvation from the East. Not only have graves often been oriented toward the East, temples and the body’s position during prayer have also been aligned in that direction.

Though some graveyards no longer heed any particular alignment, it was most common in the Western world right up through to the early 20th century to have graves face the East. Christian tradition holds that salvation may come from the East, that the bodies should be ready to face their final judgment and fate from that direction.

Ancient Egyptians built temples facing the East, as did the ancient Greeks. The history of eastward orientation was explored by William Tyler Olcott in his 1914 book “Sun Lore of All Ages.”

The Yumanas of South America buried their dead in a sitting position facing East, the abode “of their supreme deity, who would one day take unto himself all true believers,” wrote Olcott. Medieval Tartars placed statues facing eastward in mounds over their graves. First century historian Josephus tells of the legendary Solomon’s temple in Jerusalem being opened to the East and closed to the West.

Alternatively, the West has been associated with evil. In early Christian baptisms, the faithful would make signs of abhorrence toward the West, signifying a renunciation of Satan. Worshippers of Kali, the Hindu death deity, revered the West.

Some of the grave orientations have been associated with the rising of the sun. Some cultures, such as those of the native Samoans and Fijians, have held that the land of the dead is in the West and have aligned their graves accordingly.

*Images of a graveyard and an Egyptian temple via Shutterstock