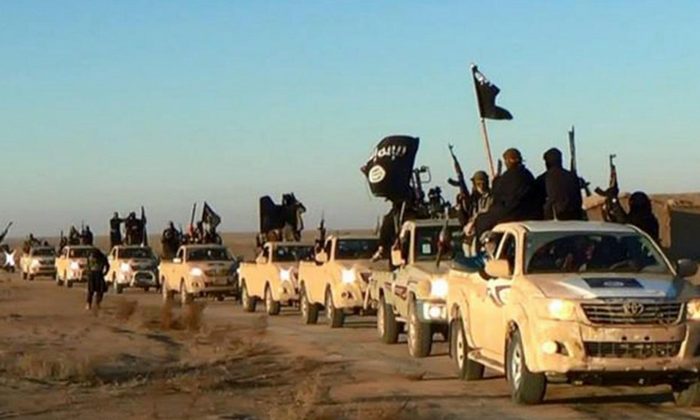 ISIS group ride in a convoy, which includes multiple Toyota pickup trucks, through Raqqa city in Syria, in a file photo. (Militant website via AP, File)
US

Why Do Extremists Drive Toyotas?, Asks US

NEW YORK—Toyota has spoken with U.S. officials about the prominent use of its vehicles by extremists in Syria, Iraq, and Libya.

Toyota trucks are conspicuous in extremist propaganda and are often what carry ISIS fighters into war with large-caliber weapons affixed to truck beds.

The company says it maintains “a strict policy to not sell vehicles to potential purchasers who may use or modify them for paramilitary or terrorist activities.”

The Treasury Department’s Terrorism and Financial Intelligence wing monitors monetary transfers and the flow of goods that could aid terrorists, and an abundance of any company’s product being used by extremists would draw attention. Yet such inquiries are often part of a more comprehensive look into how money and material flows in areas of strife where extremists operate.

Toyota released a statement that suggested just such an inquiry.

“We are committed to complying fully with the laws and regulations of each country or region where we operate, and require our dealers and distributors to do the same,” the company said. “We are supporting the U.S. Treasury Department’s broader inquiry into international supply chains and the flow of capital and goods in the Middle East.”

The Treasury declined to comment Wednesday on any specific inquiry.

Toyota says that it’s impossible for it or any automaker to control the channels through which its vehicles can be misappropriated, stolen, or resold by third parties.

“In line with our usual approach to understanding ISIL’s financial and economic activities, we are working closely with foreign counterparts and stakeholders worldwide,” the Treasury Department said in a printed statement, referring to the Islamic State of Iraq and the Levant, another name for ISIS.

While there are procedures in place to help prevent its products from being diverted for unauthorized military use, according to Toyota, the company says that it’s impossible for it or any automaker to control the channels through which its vehicles can be misappropriated, stolen or resold by third parties.