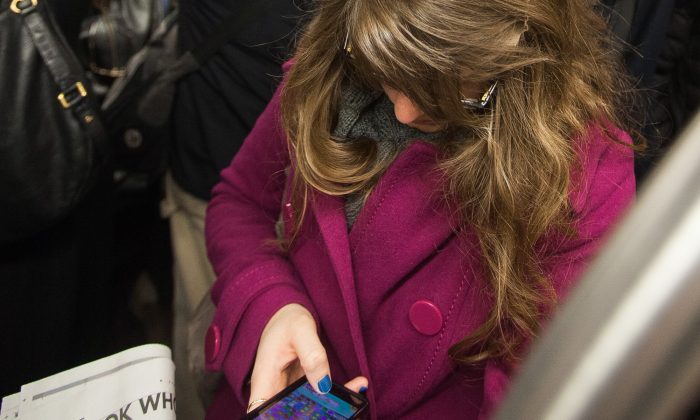 NEW YORK—New Yorkers in a subway car near you can’t let go of a sweet escape called “Candy Crush Saga” and game psychologists have some clues as to why that is.

Commuters across the city are sticking with one game despite thousands of other games available for their mobile devices. An Epoch Times spot survey of 102 commuters who play games on New York City subways found that half played “Candy Crush Saga.”

That comes as no surprise—King, the maker of “Candy Crush,” reported that the game has nearly 100 million active daily users who play over 1 billion games every day.

“‘Candy Crush’ is like a slot machine on steroids,” said Paul Ralph, director of Lancaster University Design Practices Lab in the United Kingdom. “When you think about what makes a slot machine so addictive, a slot machine provides you with a constant positive reinforcement, you just constantly have these small wins. In ‘Candy Crush’ the small win is the candies exploding.”

“Candy Crush Saga” is deceptively simple. Line up three candies and they explode, causing more candies to cascade from the top. There are no wrong moves in “Candy Crush” and every swipe of the screen is rewarded with a pleasant dash of color and a whimsical sound.

The game is also a perfect match for New York commuters. The game requires only one hand to play, so riders can clutch a pole while swiping away at their screens. Meanwhile, the game’s bite-size with short levels that allows players to engage for as little or as long as they like, turning the distraction into a daily routine for many.

Anne M., a 34-year-old law student, discovered the game a year and a half ago and has played almost every day since. She usually plays during her commute and finds the game addicting.

The vibrant candy world has also proved to relieve stress. The game’s eye candy (or iCandy) is a pleasing visual treat. They include the red jelly bean, orange lozenge, yellow lemon drop, green chiclets, blue lollipop head, and the purple cluster. Chocolate, beloved in the real world, is a villain in “Candy Crush,” spreading out whenever a player fails to clear it.

“It’s just a break from everyday because all you can think about when you’re playing is crushing candy,” said Anne M., who was on level 45 on the No. 1 train heading downtown Thursday.

Karen Dill, a social psychologist at Fielding Graduate University in Santa Barbara, said that the colorful splashes result in a positive boost for the brain and help players escape anxiety.

Dill volunteered to be hooked up to video game research equipment at a conference on the health benefits of games. While she played “Bejewelled,” a game similar to “Candy Crush,” an audience watched her brain waves mapped on a screen. Each time she lined up three gems, her brain rewarded her with a boost, which she said “makes you feel happy and relaxed and takes away feelings like anger.”

“It helps us focus on something simple and pretty with positive connotations like jewels and candy and in focusing we are not doing the usual negative things our brain tends to do, going over stressful situations from the day, worrying about that meeting with our boss tomorrow,” said Dill. “So, as long as no one is crashing their car, I think playing a simple casual game like ‘Candy Crush’ is a relaxing, de-stressing and kind of coping mechanism to combat the effects of a stressful commute.”

But stress relief is just part of the puzzle. According to Berni Good, a cyberpsychologist, “Candy Crush Saga” requires a player’s full attention. It facilitates the state of flow, wherein people enter “a state where they have clearly defined goals, they focus solely on the task in hand,” and become immersed in an activity, making all distractions dissolve.

“There are lots of psychological benefits from being in the state of flow, as it allows for an almost meditative state. ‘Candy Crush’ is similar to ‘Tetris’ and other games before it when it comes to eliciting this state of flow,” said Good.

Part of the pleasure is the game’s unpredictable nature. Studies have shown that games with random rewards have an addictive quality, with players playing with hopes of more of the same. Every now and then, by a turn of sheer luck, a simple move in “Candy Crush” turns into a chain of explosions with tiles cascading in for more rewards. Jamie Madigan, an expert in the psychology of video games, likens it to hitting the jackpot in a slot machine.

“A lot of the same psychological phenomena are at play: you did something and got a huge reward on a random interval,” Madigan said. “Your brain is wired to keep repeating what you did in order to try and get that reward again.”

“Candy Crush Saga” is free to download and play, but the developer earns money through in-game purchases. King makes more than $830,000 daily from in-game purchases in the iOS store alone, according to ThinkGaming. “Candy Crush” is also the top grosser in the Google Play store and the most popular game on Facebook.

Players pay either to continue the game once their attempts run out or for special boosters. Several game psychology experts who spoke to Epoch Times said that the game is designed to draw money from users, but noted that it should be expected as with any commercial product.

“It’s absolutely designed to draw money from players,” said Matthew Barr, a games researcher at the University of Glasgow in Scotland.

According to Barr, some games are designed to be easy to keep players coming back. But games, which really succeed on the financial side strike a balance in increasing the difficulty level just enough to keep players engaged and then raising the possibility of paying to advance.

“‘Candy Crush Saga’ does get hard. So as you advance and you start to pay to win, you’re going to get increasingly attached to paying to win,” Barr said.

Stratospheric profits from games like Candy Crush that use the “freemium” model have alarmed some authorities in Europe, who are investigating whether they are taking advantage of players. But one need only to look back at the time when teens and adults alike poured quarter after quarter into arcades for a few minutes of fun.

“The idea of people trickling away small payments on an addictive game is not new at all. That’s what ‘Pac-Man’ fever was all about,” said James Ivory, director of the Virginia Tech Gaming and Media Effects Research Laboratory.

The game’s popularity is due in part to its effective integration with Facebook. When players fail to pass a level several times, they can reach out to their friends on Facebook to ask for extra “lives.” That mechanism promotes the game to others, but also gives people a sense of belonging.

“Cooperation like this, tied to simply playing, is a strong motivator because it means no matter how skilled you are you can be helping your friends, but also means you will encourage your friends to play so you can get help yourself,” said Ben Lewis Evans, a user researcher at Player Research, a group of industry-leading, play-testing and user research specialists.

The reasons for the success of “Candy Crush” are hard to pin down. There were many games just like it on the market before it went viral. Game designers all over the world are dubious as to what really made the game succeed. Experts say luck had to do a lot with it.

“Getting your game or your app found on the App Store or Google Play store is next to impossible unless there is some kind of luck involved,” said Barr, a games researcher.

Barr added that King’s lawyers went after developers who used the words “candy” and “saga” in their game names to eliminate competition in search results.

“Probably the thinking behind their lawyers moves was it’s so crowded out there, it would be very easy to look up something that was similarly named and mistake it for the real thing,” Barr said.

The financial success of “Candy Crush” is much similar to the soda and snack industry, which markets low-price items that provide consumer with momentary pleasure.

“If you think about where a lot of money gets made on consumer products, it’s keeping us busy or keeping us happy for a few minutes—sodas and candies and some of these mobile game are little bit the same,” said Ivory.

But like sodas and sugary snacks, there is little substance in “Candy Crush” beyond the immediate pleasure.

Monique W., 25, a dental student who has played the game for an hour or more every day for over a year said, “It’s just entertainment.”