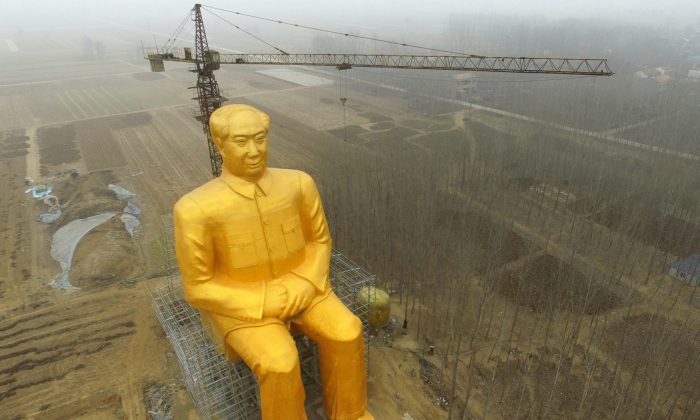 An almost finished, 120-foot-tall golden statue of Mao Zedong could once be seen sitting, hands on lap, atop a wire frame in front of a barren field in central China. Giant Mao would only survive two days more after its existence was reported in Western media and widely mocked on the Chinese Internet.

Demolition teams started tearing down the statue in Tongxu County, Henan Province on the morning of Jan. 7, according to The New York Times. By Friday, the 3 million yuan ($465,000) statue of the former Chinese regime leader and dictator, which was financed and constructed under the auspices of a local businessman and prominent county Party cadre, was demolished.

The Chinese Communist Party (CCP) has always struggled to commemorate Mao Zedong, its most prominent but problematic leader. While Mao’s image is kitsch—his face adorns tourist memorabilia in marketplaces—the erecting and swift tearing down of the gold-painted Mao in Henan is loaded with symbolic meaning, according to experts.

Perhaps the demolishing of such a large Mao statue marks a turning point in the Chinese authorities’ stance on criticizing Mao.
— Chen Kuide, 'China in Perspective' chief editor

According to state mouthpiece People’s Daily, local authorities said that the statue was demolished because its construction “wasn’t registered or reviewed.” But “the phrase is merely a language-game device used to put a ‘legal’ face on what somebody with CCP power wants,” wrote Perry Link, Professor Emeritus of East Asian Studies at Princeton University and longtime China watcher, to Epoch Times in an email.

Link added: “In general, the Communist Party’s dilemma about how to handle Mao’s legacy is this: if you give him up, you undermine a foundation of CCP power; if you make too much of him, you invite genuine re-examination of what he did, which includes some really ugly things.”

On the one hand, the Party credits Mao for overthrowing the Chinese Nationalist Party and ousting Western interests from the country.

The Party, however, can’t adequately defend the impact of Mao’s disastrous campaigns: Henan Province, where the golden Mao statue stood, was one of the areas worst-hit by famine in China during the Great Leap Forward from 1959 to 1962; later, the decade-long Cultural Revolution destroyed traditional Chinese culture and caused the deaths of millions of Chinese.

Despite the Party’s attempt at a more moderate appraisal of Mao—subsequent Party leader Deng Xiaoping famously called his predecessor “seven parts good, three parts bad” in 1982—a Mao cult emerged from the late 1980s to early 1990s when the Party promoted past revolutionaries to strengthen its legitimacy, which had suffered while reforms were made to open up China. A second “Mao craze” arose in recent years as rising income inequality led some people to worship Mao’s socialist ideals.

Still, the building and swift destruction of the golden Mao statue would have been impossible following the death of the former dictator up to the 1990s because the Party was still sensitive to monumental tributes, according to Chen Kuide, the chief editor of the online Chinese magazine China in Perspective.

Then, “even if someone did find a way to erect a statue, it would be secretly taken down and not announced,” Chen said in a telephone interview.

“Perhaps the demolishing of such a large Mao statue marks a turning point in the Chinese authorities’ stance on criticizing Mao,” he added.