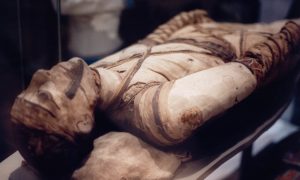 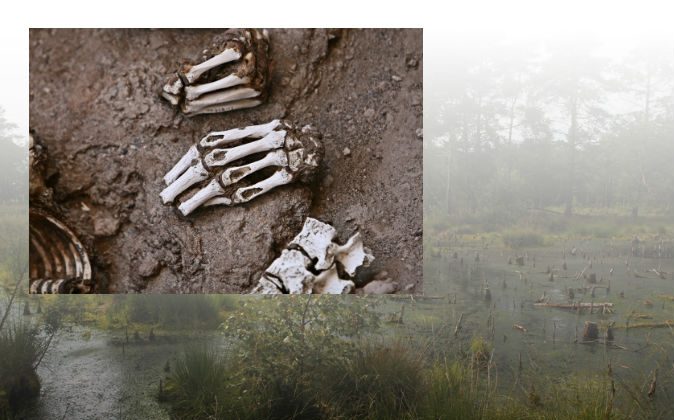 File photos of mummies and a bog. In Scotland, archaeologists found ancient bodies that revealed very unusual treatment of dead bodies involving in part the use of a bog. (Shutterstock*)
archaeology

In 2001, a team of archaeologists found four skeletons at an archaeological site on the island of South Uist in the Outer Hebrides in Scotland. At first, it appeared to be a typical Bronze Age discovery, but the researchers soon discovered that the finding was far from normal.

The skeletons, one male and one female, were buried in the foetal position. Initial tests revealed that the male had died in around 1600 BC and the female had died in approximately 1300 BC. However, the scientists were perplexed at some of the characteristics of the remains, for example the fact that the skeletons were very highly flexed, so they conducted further analyses. To their astonishment, they found that although the male had died in around 1600 BC, he had not been buried until a full six centuries later, in around 1,000 BC. Similarly, the female was not buried until 300 years after her death. This was highly unusual since any skeletons left unburied for that length of time would have ended up as just a pile of bones.

At closer inspection, the research team discovered that the bodies had once been preserved, which permanently held the skeletons together. Using modern forensic techniques, it was found that the outer 2mm of the bone had been demineralised, which is consistent with preservation caused by submersion in a peat bog for between 6 and 18 months. The discovery was unique because it is the only place in Great Britain where prehistoric mummies have been found.

Evidence suggests that the bodies were purposely preserved and later retrieved from the bog and set up inside a dwelling, presumably having religious significance.  Sheffield University Professor Mike Parker Pearson believes the mummies played an important part in their society, and as part of ancestral worship, may have been asked for spiritual advice to help the community make decisions.

However, the story did not end here, because a decade later, another incredibly finding was made. Further DNA examination of the remains led to the startling discovery that the two skeletons were actually made up of body parts from six different individuals! In the male skeleton, the torso, skull and neck, and lower jaw belonged to three separate men, and the female skeleton is a composite formed from a male skull, a female torso, and the arm of a third person whose gender had not been determined. Carbon dating revealed that the skull of the ‘female’ mummy is 50 to 200 years older than the torso. It appears that the mummies were made up of parts from people in the same families and then put together like a jigsaw to make it look like they were just one person.

Archaeologists have no idea why the remains were mummified and then mixed together. However, Parker Pearson believes that the mixing of remains was done to combine different ancestries of families to create a ‘symbolic ancestor’ that literally embodied traits from multiple lineages. “These could be kinship components, they are putting lineages together, the mixing up of different people’s body parts seems to be a deliberate act,” he said.

However, Terry Brown, a professor of biomedical archaeology at the University of Manchester, is more cynical and believes that the Bronze Age people of South Uist were just practical: “Maybe the head dropped off and they got another head to stick on.”

*Images of a bog and mummies via Shutterstock