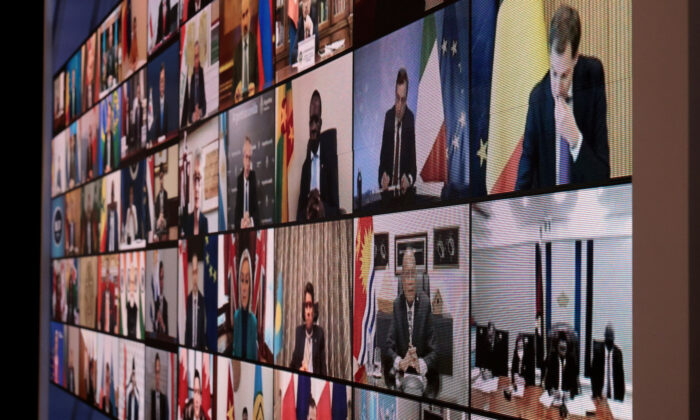 A video wall displaying participants in the White House's Summit for Democracy stands in the South Court Auditorium in Washington on Dec. 9, 2021. (Chip Somodevilla/Getty Images)
Thinking About China

Beijing’s “whole-process democracy” is a Marxist euphemism that masks a communist dictatorship.

China has a burr under its saddle because it was left out of the Summit for Democracy convened by the Biden administration this past week. There has been a daily barrage from Beijing about the alleged divisiveness of the summit and the supposed shortcomings of the United States, including the following messaging from state-run media China Daily and People’s Daily:

The deluge of articles and commentary about the democracy summit in the Chinese media over the past couple of weeks has simply been incredible! The above list is just a sampling. Apparently, Beijing left uninvited stirred up a hornet’s nest.

While it is quite understandable that Chinese communists do not understand what a real democracy consists of in terms of generally accepted principles around the world, there are at least two specific political reasons for the Chinese Communist Party’s (CCP) flood of crocodile tears:

Xi obfuscates the truth, as all communists learn to do throughout their careers. In this instance, the key word in his statement is “people.” The people to which he refers are the members of the CCP who are the “first among equals” at all levels of Chinese government—including national, provincial, prefecture, and county—all the way down to towns and villages. The so-called “party secretaries” outrank the government officials at every level of government.

What kind of democracy permits unelected members of the predominant political party in a nation to make and overrule all the key decisions at every level of government? How on Earth can Xi imply that non-CCP members can somehow “have the right to democratic decision-making”—and other similar nonsense—when only the CCP can pull the strings? What good does it do for the average citizen to “cast a vote” under these circumstances? And it is patently absurd to believe that the opinions of average Chinese citizens have any impact on Xi’s decision-making process whatsoever—unlike in almost all truly democratic nations—as he is not accountable to the will of the people at the ballot box. That is certainly not democracy as the rest of the world understands it!

Furthermore, none of the major governing bodies at the national level in communist China are elected by the Chinese people.

Are the above institutions the product of Xi’s “whole process-democracy”? Just where is the “democracy” hiding in the byzantine Chinese government anyway? Are the governing institutions of the People’s Republic of China even legitimate because the system was certainly not set up through peaceful democratic action and the will of the average Chinese, but rather under the bayonets of Mao Zedong’s People’s Liberation Army at the express direction of the CCP? Without the omnipresent coercion and threats from the CCP, would the Chinese people consider the CCP-run government to be legitimate as Xi and others assert?

“Whole-process democracy” is communist gobbledygook, and “democracy with Chinese characteristics” seems a whole lot like communist dictatorship to most people around the world. No wonder Beijing was not invited to the democracy summit!