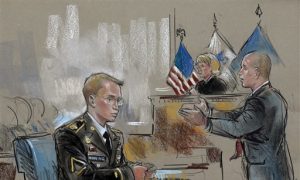 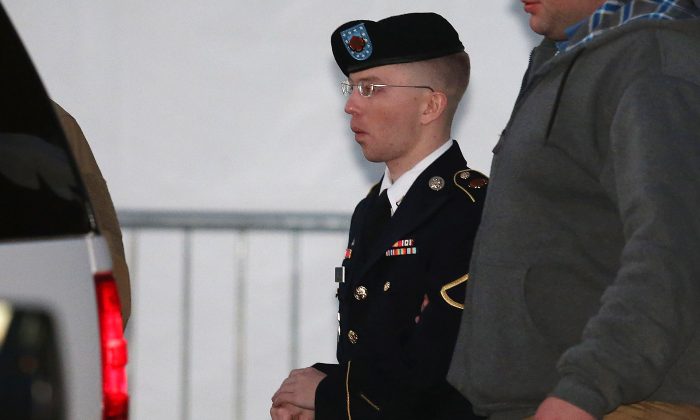 Pfc. Bradley E. Manning is escorted from an earlier portion of the trial, on January 8, 2013 in Fort Meade, Maryland. Manning pled guilty to leaking documents, and now military prosecutors are trying to prove that by doing so he was aiding the enemy, in the portion of the trial that started on June 3, 2013. (Mark Wilson/Getty Images)
US

Bradley Manning, a private in the United States Army, said he was motivated to leak hundreds of thousands of files to Wikileaks because of growing frustration with how the conflicts in Iraq and Afghanistan were going.

“ I believe that if the general public, especially the American public, had access to the information contained within [some of the documents], this could spark a domestic debate on the role of the military and our foreign policy in general … as it related to Iraq and Afghanistan,” he said, according to a transcript of his testimony earlier this year.

“I also believed the detailed analysis of the data over a long period of time by different sectors of society might cause society to reevaluate the need or even the desire to engage in counter-terrorism and counterinsurgency operations that ignore the complex dynamics of the people living in the affected environment everyday,” he said.

Manning, on leave, spent time in his aunt’s house in Maryland in early 2010, being “essentially stuck” there during a blizzard. He began to ponder the information he possessed, and what it would do to make it public.

He first explored making it public with his local newspaper, the Washington Post, but said that a reporter he talked to didn’t seem to take him seriously. He reached out to the New York Times, but couldn’t get through to anyone, and a number and email he left on an answering machine never got a call or message.

He then decided to leak documents to the Wikileaks organization, referred to by him as WLO.

Manning was working as an analyst in the military, working on a tool to track incidents. He was creating a new version of it, using SigActs from Afghanistan and Iraq.

“SigActs give a first look impression of a specific or isolated event,” he explained. “This event can be an improvised explosive device attack or IED, small arms fire engagement or SAF engagement with a hostile force, or any other event a specific unit documented and recorded in real time. “

He was sifting through many documents, and came upon several that disturbed him. One was a video of soldiers in a helicopter engaging people on the ground, which at first Manning didn’t think was anything different from videos he’d already seen. But the comments by the helicopter crew troubled him.

He heard a debate amongst the crew about whether what happened that day, July 21, 2007, had violated the rules of engagement, so he started researching the event. He found Reuters had submitted a Freedom of Information Act request for the video, because two of its employees were killed in the incident. But the news agency eventually didn’t pursue its request because the military said the video might not exist anymore.

“The fact neither CENTCOM or Multi National Forces Iraq or MNF would not voluntarily release the video troubled me further,” he said. “It was clear to me that the event happened because the aerial weapons team mistakenly identified Reuters employees as a potential threat and that the people in the bongo truck were merely attempting to assist the wounded. The people in the van were not a threat but merely “good Samaritans”. The most alarming aspect of the video to me, however, was the seemly delightful blood-lust they appeared to have.”

The video, after researching it further, “burdens me emotionally,” Manning said.

“I hoped that the public would be as alarmed as me about the conduct of the aerial weapons team crew members,” he said.

“I wanted the American public to know that not everyone in Iraq and Afghanistan was a target that needed to be engaged and neutralized, but rather people who were struggling to live in the pressure cooker environment of what we call asymmetric warfare. After the release I was encouraged by the response in the media and general public, who observed the aerial weapons team video. As I hoped, others were just as troubled – if not more troubled that me by what they saw.”

As for the diplomatic cables, Manning said that the more he read them, the more he came to the conclusion that the cables should be made public. He said he didn’t believe that it would damage the United States, but that it might be embarrassing, “since they represented very honest opinions and statements behind the backs of other nations and organizations.”