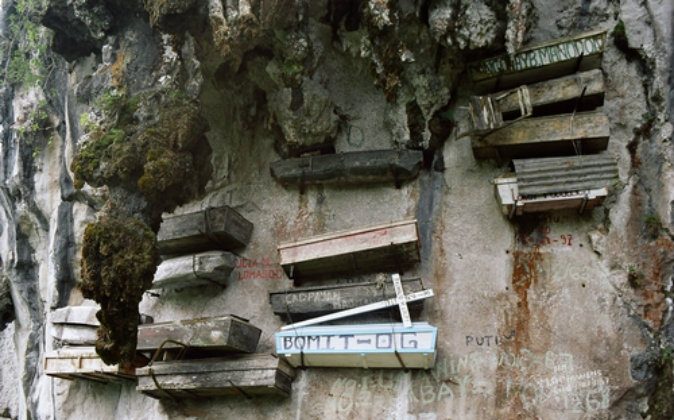 Why and How Different Cultures Bury the Dead

Funerary rites, like death, are a source of fascination tinged by mystery and fear. Closely related to how we view the afterlife and how we relate to one another, these rites touch on something fundamental to human nature. Here’s a look at how we bury our loved ones, how some other societies have buried their loved ones, and why.

A file photo of a flower in a man’s hands. (Thinkstock)

Flowers were left on Neanderthal graves 65,000 to 35,000 years ago. Anthropologist Ralph Solecki of Columbia University unearthed the fossils in the 1950s and was amazed to find tenderness among the Neanderthals—not only flowers left on graves, but also serious injuries and illnesses that had been tended to and healed. The site, located in northern Iraq, became known as the Shanidar cave. Solecki was inspired to write a book titled “Shanidar: The First Flower People.”

The Bo ethnic group of China were the first people known to have hung their coffins, with the oldest hanging coffins dating back some 2,500 years in the Three Gorges area. These coffins can be found lining cliffs also in the Philippines, Indonesia, and other regions.

China.org quotes Li Jing, who wrote during the Yuan Dynasty (1279-1368) in his “Brief Chronicles of Yunnan”: “Coffins set high are considered auspicious. The higher they are the more propitious for the dead.”

Some say the practice may be meant to raise the dead closer to heaven while keeping the bodies away from scavenging animals below. Some say it saved precious land for agriculture in areas where such land was more scarce.

The practice has continued into modern times in some areas. For example, in Echo Valley, Sagada, Philippines, coffins were hung up about a century ago.

Sometimes the coffins do fall. Restoration work has helped preserve some.

Burial at sea for the officers and men of the USS Intrepid (CV-11) who lost their lives when the carrier was hit by Japanese bombs during operations in the Philippines, Nov. 26, 1944. (Barrett Gallagher)

Throughout history, many travelers from all over the world have been buried at sea. The U.S. Navy website states, “In earlier times, the body was sewn into a weighted shroud, usually sailcloth.” Royal W. Connell, William P. Mack write in their book, “Naval Ceremonies, Customs, and Traditions,” that the shroud was sewn up by a sailmaker or one of the deceased’s mates. “The sailmaker, when sewing the canvas shroud, takes the last stitch through the nose of the deceased.”

The body is weighted so it will sink to the bottom. The deceased is then laid at rest in “Davy Jones’ Locker,” which is slang for the bottom of the sea.

In Hawaii, burial caves have been found on every island. In some, the deceased were bound in the fetal position. It was believed that the bones of the dead hold great mana, or divine power. It became common to hunt for burial caves to find treasure left with the bodies, leaving few sites intact for researchers.

Why Bury the Dead?

In ancient Greece, the unburied dead were thought to suffer greatly. In Homer’s “Odyssey,” the ghost of Elpenor cannot enter the realm of the dead peacefully until his body is buried. In the Greek tragedy “Antigone,” written by Sophocles around 441 B.C., the king of Thebes orders that an alleged traitor’s body must remain unburied. The traitor’s soul would thus be left to roam the earth in suffering.

Christians in the Middle Ages would not cremate their dead, because it was thought that on Judgment Day, the dead would rise to heaven with their bodies.

In many cultures, it is believed that souls will become lost or suffer if not guided to heaven or if their bodies are disturbed. Thomas W. Laqueur, professor of history at the University of California, Berkeley, gave a lecture on the topic last month at the Radcliffe Institute for Advanced Study.

He quoted Hugo Grotus, the father of modern law, who wrote in the early 17th century: “The right to burial is common to all civilized nations, and it is evidence of our common nature of compassion, religion, and humanity.” Grotus declared that denial of burial was just cause for war.

For Laqueur, the reason we bury our dead is to comfort the living. It comes, in part, from “the need to make something live out of something we know to be dead.”