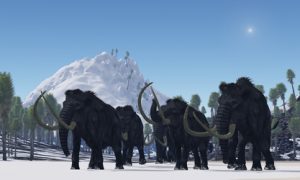 Why a Comet Probably Didn’t Kill Off Mammoths

A new study casts doubt on the theory that a cosmic impact 12,900 years ago triggered the Younger Dryas cold period, which coincided with the extinction of mammoths.

The Younger Dryas lasted a thousand years and happened around the same time as the extinction of great beasts and the disappearance of the Paleo-Indian Clovis people.

Research from the 1980s suggested that the cool period, which fell between two major glaciations, began when a comet or meteorite struck North America.

Woolly Mammoth Brain Found—Best Specimen in History
Woolly Mammoth Gave Birth to 9 Babies: Can She Have Another 28,000 Years Later?

Scientists Might Have Found a Complete Mammoth Skeleton (Video)

Did a Comet Kill the Woolly Mammoths?

For the study, published online in the Journal of Archaeological Science, scientists analyzed siliceous scoria droplets—porous granules associated with melting—from four sites in northern Syria dating back 10,000 to 13,000 years ago.

They compared them to similar scoria droplets previously suggested to be the result of a cosmic impact at the onset of the Younger Dryas.

“For the Syria side, the impact theory is out,” says lead author Peter Thy, a project scientist in the earth and planetary sciences department at University of California, Davis. “There’s no way that can be done.”

The findings supporting the new theory include:

“If there was one cosmic impact,” Thy says, “they should be connected by one date and not a period of 3,000 years.”

Mammoth With Blood Found in Siberia

So if not resulting from a cosmic impact, where did the scoria droplets come from?

The study area of Syria was associated with early agricultural settlements along the Euphrates River. Most of the locations include mud-brick structures, some of which show signs of intense fire and melting.

The scoria formed when fires ripped through buildings made of a mix of local soil and straw, the researchers say.