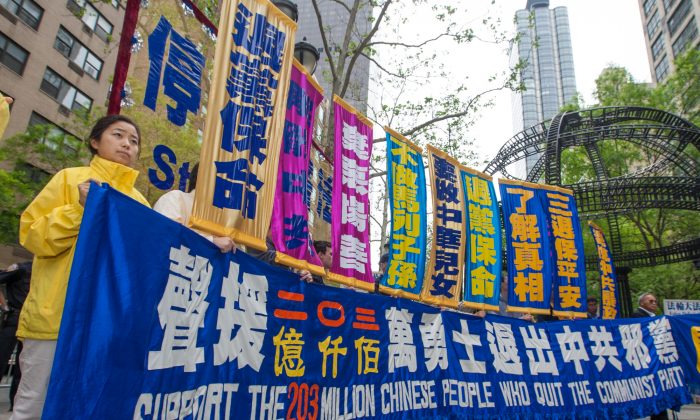 Over 8,000 human rights activists, members of The Global Service for Quitting the Chinese Communist Party, and Falun Gong practitioners, hold a rally in front of the United Nations in New York on May 15, 2015, celebrating over 200 million Chinese people who have quit the Chinese party. (Youth Ma/Epoch Times)
US News

Frank Fang
journalist
Frank Fang is a Taiwan-based journalist. He covers US, China, and Taiwan news. He holds a master's degree in materials science from Tsinghua University in Taiwan.
View profile
Follow
and Leo Timm

NEW YORK—Gathering near the United Nations in Dag Hammarskjold Park, around 8,000 people attended a rally supporting Tuidang, the movement dedicated to ending the Chinese Communist Party that has been spreading like wildfire in recent years.

The rally featured speeches by a Taiwan human rights lawyer, the executive editor of Epoch Times English-language edition, an independent film producer, and the head of a German human rights organization. But the highlight of the rally occurred when two young men recently emigrated from China stepped to the podium and announced they were quitting the Chinese Communist Party (CCP).

Zhang Yu, 31, from central China’s Henan Province, said that after coming to America: “I came to understand what I did not understand when I was still back in China. Gradually I became part of the group of people who share the same understanding [of what the Communist Party is]. So today, my cousin and I solemnly declare our renunciation of the Party and its affiliated organizations.”

His cousin, 29-year-old Liu Fei, said he came to grasp the importance of human rights and freedom after coming to the United States.

Because I have experienced a lot, I am very happy that I can quit this evil Party
— Liu Fei, recently emigrated from mainland China

They attended the rally with their employer, Bian Hexiang, chairman of a pro-democracy activist group called The Coalition of Guards. Bian has lived in the United States for 15 years and has supported the Tuidang movement since its inception.

“I only hire people who are against the Communist Party,” Bian said. “They [Chinese people] come to America, because they see how [Chinese] prices keep increasing, and how the standard of living in China is rapidly decreasing.”

“After arriving here, they have the opportunity to read massive amounts of news and information that are otherwise blocked in China. This is the most important,” Bian continued. He particularly urged Liu and Zhang to read the Epoch Times website and watch New Tang Dynasty TV.

The Tuidang Movement began in December 2004 shortly after the Chinese-language Epoch Times published the “Nine Commentaries on the Communist Party,” an editorial series providing an uncensored history of the Chinese Communist Party, describing the violence and lies it has used to rule.

Uttering ‘Tuidang’ in China Can Get You Arrested

Individual Chinese began contacting the paper saying they wanted to leave the CCP. Since then, over 200 million Chinese people have renounced the Communist Party and its affiliated organizations.

Though the Chinese Communist Party itself has only around 80 million members, hundreds of millions of people joined the Party youth organizations in primary and secondary school, the Young Pioneers and the Communist Youth League. All who join these three organizations declare an oath of faith to the Party. By renouncing their membership in these organizations, they cancel these pledges.

One of those who took part in the May 15 rally was Ben Zhao, a young man from northeast China now studying accounting in college in Ontario, Canada, who had been a member of the Party’s youth organizations.

“I quit the Party in high school, when I was 16 years old,” Zhao said.

“Whether it’s the Cultural Revolution or other movements, the Communist Party has killed many people,” Zhao told Epoch Times. “From a historical perspective, just like the Nazis, those committing mass murder will receive punishment. I needed to quit the Party, so I would not be a part of this.”

Zhao practices Falun Gong, a Chinese spiritual practice that the regime began persecuting in 1999. In China, the movement to quit the Communist Party is driven by the individual efforts of tens of millions of Falun Gong practitioners. Risking arrest and torture, they have spread information about Tuidang and have assisted those wishing to renounce their ties to the Party.

The rally was one of several events held this past week in New York marking World Falun Dafa Day, the anniversary of the date Falun Gong was first publicly taught in China in 1992.

From Europe to Brooklyn: Hundreds Stream Across Brooklyn Bridge for Human Rights in China

While the Tuidang Movement has been vigorous since its inception, in the past year it has taken off, as indicated by the graph below. At the beginning of 2014, a little fewer than 2 million withdrawals were recorded each month. Since then the rate of withdrawals has rapidly accelerated. It now stands at over 3.5 million per month.

“Falun Gong practitioners follow the principles of truthfulness, compassion, and tolerance; they are a group of good people. They do not get involved in politics, and they do no wrong. But the Communist Party persecutes these people, and many have been killed.” said Zhao.

“We are a group of people, who must speak the truth, do things in a genuine fashion, and be kind to everyone. But we are enduring much injustice now. We are a very good group. I want to tell [Westerners] that in China today, something extremely horrible is going on,” Zhao said.

The Tuidang Movement calls upon the Chinese people to move toward freedom.

The ‘Nine Commentaries’ Shows the Path to China’s Future
People in New York … can sense through this rally how the Chinese people are awakening
— Frank Wu, a Falun Gong practitioner from the Netherlands

Frank Wu lives in the Netherlands and has practiced Falun Gong since 1996. He saw a “glimpse of hope” for the Chinese people at the start of the Tuidang Movement in 2004.

“This Tuidang is a peaceful, rational, and nonviolent movement. It can bring hope to the Chinese people. We will not turn a blind eye to the evil Party and then fulfill its desires,” Wu said. “People in New York, an international metropolis, as well as Chinese people living here, can sense through this rally how the Chinese people are awakening.”