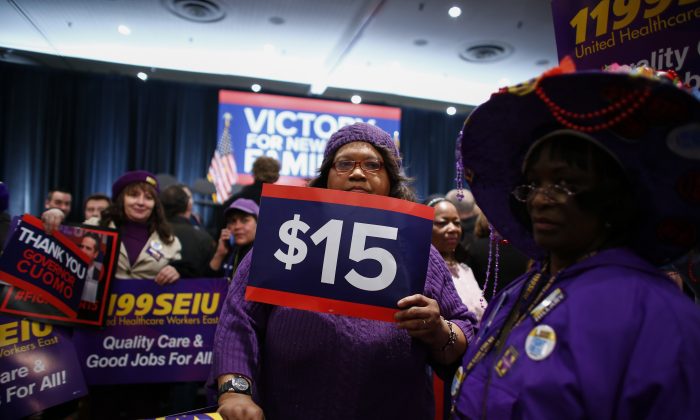 A woman holds banners before Democratic presidential candidate Hillary Clinton speaks during a event named as a "victory rally for $15 minimum wage and paid family leave" at the Javitz Center in New York on April 4, 2016. (Kena Betancur/AFP/Getty Images)
Opinion

Who’s Really Behind the Fight for $15

When the Fight for $15 hosts its “Day of Action for Worker Justice” on Thursday, the picket signs might as well have “SEIU” written all over them in big letters.

The Service Employees International Union (SEIU) has been pulling the strings for a $15 minimum wage from the start. According to the SEIU’s federal filings with the Department of Labor (DOL) released this month, the labor union spent roughly $20 million on the Fight for $15 in 2015. That brings the estimated total up to around $70 million since the campaign began in 2012.

And the trail of money suggests anything but a grassroots effort: The SEIU’s fingerprints can be traced from lobbying vehicles known as “worker centers” to pricy political consulting firms.

In New York, the fiercest fighter for $15 is the so-called Mario Cuomo Campaign for Economic Justice (MCCEJ). A closer look reveals MCCEJ is an invention of the politically influential SEIU Local 1199—the two are located in the same Midtown office building. With the help of Local 1199 (and other affiliated unions), the self-proclaimed “coalition of working people” has reportedly spent $1.72 million on Fight for $15 lobbying in 2015 alone—including the RV and meeting space for one of Governor Andrew Cuomo’s recent events.

The “Fast Food Workers Committee” that promotes actions in New York is the largest of several “Workers Organizing Committees” (WOCs)—quasi-unions that report zero membership in their federal filings but receive millions of dollars ($16.4 million in 2015 alone) in SEIU subsidies. The WOCs then pass most of the money through to worker centers including New York Communities for Change, Action North Carolina, and the Progressive Leadership Alliance of Nevada.

Consulting firms are also big beneficiaries. The Fight for $15 has been a boon to public relations firm Berlin Rosen, which has close ties to New York City Mayor Bill de Blasio. Since 2012, SEIU has paid the firm approximately $4.2 million for services including organizing and promoting the “fast food strikes” that have accompanied the campaign.

New York’s MCCEJ also has two consulting firms on retainer: SKDKnickerbocker and Metropolitan Public Strategies. The former is paid $17,500 monthly, while the latter receives $15,000 a month.

These hefty sums scream corporate PR campaign louder than grassroots movement. And they beg the question: Does the SEIU rank-and-file actually support the financial investment in the Fight for $15? Many of the employees advocating for (and affected by) a potential $15 minimum wage—most notably fast-food workers—aren’t even members of the union.

Since the Fight for $15 was launched in 2012, the SEIU has not recruited a substantial number of fast-food workers. In fact, the union has lost almost 34,000 members since 2012.

Minimum wage hikes do carry a side-benefit for SEIU Local 1199 and other affiliates: Dues payments are often pegged to wages, so boosting some members’ wages also boosts the unions’ pool of dues money. But this doesn’t guarantee more members. And the SEIU’s declining union membership has triggered some anxiety. One SEIU organizer admitted the rank-and-file would grow “restless” if “$15 and a union” failed to significantly increase union membership.

Whether it does or not, we should recognize the campaign for what it really is: A front for Big Labor’s special interests.

Richard Berman is the executive director of the Center for Union Facts.