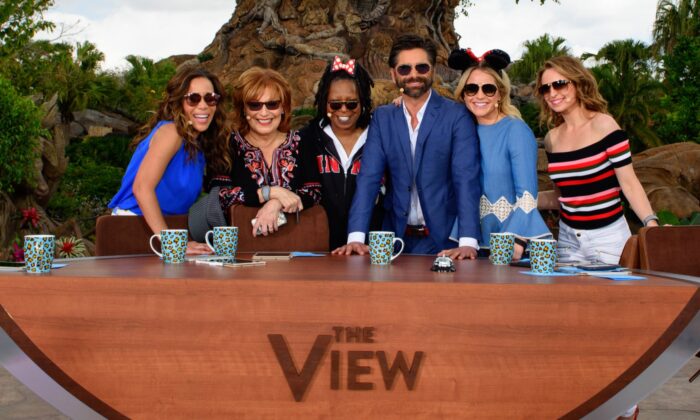 Sara Haines, a co-host of Whoopi Goldberg from “The View,” showed support for the long-time talk show host after several fans said they think the length of her suspension is not enough in comparison to what she did.

Goldberg has been widely criticized after declaring that the Holocaust was “not about race”—which was followed by a statement from the network on Feb. 1 announcing a two-week suspension for the host.

Haines posted a selfie on Instagram of the duo laughing, writing in the caption of the post that seeing this picture “warmed [her] heart.”

“This just popped up and warmed my heart,” Haines said. “That’s my Whoops!!!!”

The 44-year-old’s post gained the attention of several of her followers, prompting a debate over the length of Goldberg’s suspension.

“To learn from a moment is all we can ask of anyone. And prioritizing punitive measures at the expense of the message/issue (and teaching moment) are misguided.”

Some fans in disapproval of Goldberg’s “Holocaust remarks” said the long-time host should get fired, while another Instagram user called for the show to get canceled.

“I cannot believe you’re making excuses for Whoopie Goldberg anybody else would have been fired!!!!” one person commented on Haines’s post. Another person wrote that the whole show should be canceled, claiming it includes “nothing but hate.”

Goldberg released a statement one day after her remarks—apologizing for the “hurt” she had caused after a social media outcry over her view on the genocide of 6 million Jews.

“On today’s show, I said the Holocaust ‘is not about race, but about man’s inhumanity to man.’ I should have said it is about both,” she wrote. “As Jonathan Greenblatt from the Anti-Defamation League shared, ‘The Holocaust was about the Nazi’s [sic] systematic annihilation of the Jewish people—who they deemed to be an inferior race.’ I stand corrected.”

Goldberg made her original comments during a discussion on Monday’s show about a Tennessee school board’s banning of “Maus,” a Pulitzer Prize-winning graphic novel about the Nazi death camps during World War II.

“I misspoke,” the host said at the opening of Tuesday’s show, a day later.

According to the United States Holocaust Memorial Museum, the Nazi regime did define Jews as a “race.” Embracing a social Darwinist “survival of the fittest” view of human society, the Nazis attributed a wide variety of negative stereotypes about Jews to an unchanging, biologically determined heritage that supposedly drove the “Jewish race” to struggle to survive by expansion at the expense of other races.