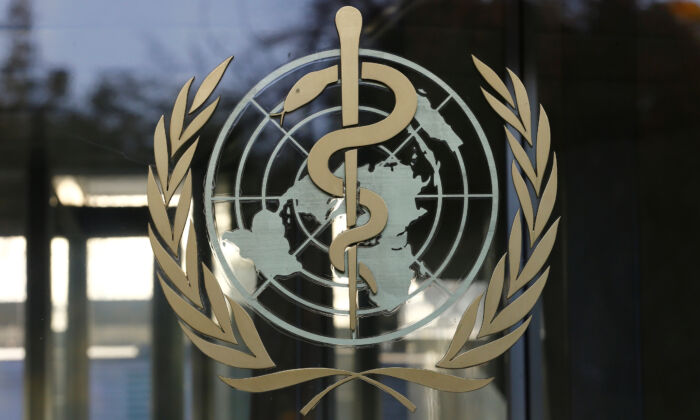 A logo of the World Health Organization (WHO) at WHO headquarters in Geneva, Switzerland. (REUTERS/Denis Balibouse)
Social Issues

WHO Warns That New Viral Pneumonia in China May Be Contagious

The World Health Organization (WHO) warned on Jan. 14 that the virus behind a respiratory illness that broke out in China could be contagious.

The WHO is preparing for the possibility that there could be a wider outbreak, she said at a news briefing in Geneva.

Chinese authorities identified a new type of coronavirus as the pathogen causing a new form of severe pneumonia that originated in the central city of Wuhan.

Coronaviruses are a large family of viruses, some of which cause the common cold, while others found in bats, camels, and other animals have evolved into more severe illnesses.

The United Nations agency also said it’s offered guidance to hospitals worldwide about infection prevention and control in case the new virus spreads. There is no specific treatment for the new virus, but anti-virals are being considered and could be “repurposed,” Van Kerkhove said.

The Wuhan Municipal Health Commission said Jan. 14 that there’s no obvious evidence that the disease could be transmitted between humans. However, it conceded that among the patients diagnosed with the illness, there is one husband-wife couple.

The husband works at the Huanan Seafood Market, which has been linked to the outbreak, and was the first of the couple to exhibit symptoms. His wife, who hadn’t been to the market, later began to cough and developed a fever, according to authorities.

The market has been closed by the health commission since Jan. 1.

Several patients visited or worked at the seafood market, which also sells wild game. But authorities said they haven’t yet identified the cause of the illness, and are continuing to investigate.

Also, state-run media Beijing News previously reported that two patients were confirmed to be a mother and son, with the latter a poultry shop vendor at the market. The mother, who frequently goes to the market to deliver food to her son, first exhibited symptoms of pneumonia. The son, a middle-aged man, later began running a fever, according to the Jan. 2 report.

Former Chinese health ministry official Chen Bingzhong told Epoch Times affiliate NTD in an interview that it’s irresponsible for Chinese authorities to not be forthcoming with information about the disease, even prohibiting media from reporting about it.

Hong Kong media reported Jan. 14 that while reporters from several outlets were filming outside the Wuhan hospital where patients were being treated, hospital staff stopped them and brought them to a local police station, where they were questioned for roughly an hour and a half before being released.

“This means many more people have not been tracked down [in China], causing its spread,” he told NTD.

On Jan. 13, Thailand’s public health ministry said a female Chinese tourist has been diagnosed with the Wuhan pneumonia, in the first confirmed case outside Wuhan.

The patient, who has recovered, is still in Thailand. Authorities didn’t provide further details about the patient’s background or how she may have contracted the illness.

With Chinese New Year approaching on Jan. 25, when many Chinese tourists visit Thailand, the WHO called on Thai authorities and the general public to be on alert. Richard Brow, the agency’s representative in Thailand, said anyone with a fever and cough who had spent time in Wuhan should be checked by a health worker.

Meanwhile, Hong Kong has sent a delegation to Wuhan to learn about the illness. Hong Kong leader Carrie Lam said at a Jan. 14 press conference that she would provide further updates after a scheduled meeting with local health experts on Jan. 15.

While dozens of patients with pneumonia-like symptoms have been identified and hospitalized in Hong Kong, Lam said there have been no confirmed cases of the Wuhan pneumonia in Hong Kong.

Authorities released the virus’s complete genetic sequence on Jan. 11, allowing public health professionals to detect whether a patient has the same illness that was first confirmed by Wuhan health authorities on Dec. 31, 2019.