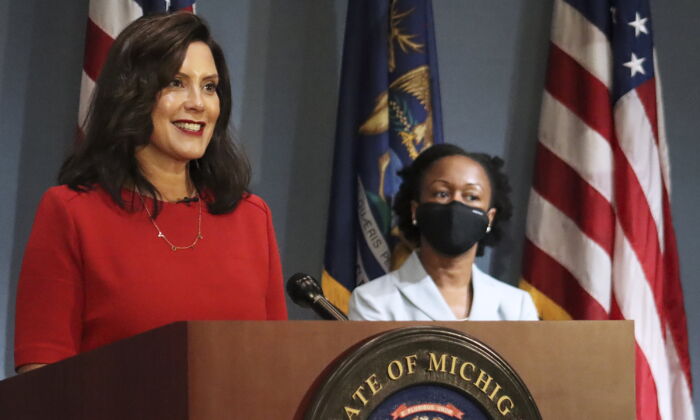 Michigan Gov. Gretchen Whitmer addresses the state during a speech in Lansing, Mich., on Sept. 16, 2020. (Michigan Office of the Governor via AP, File)
Judiciary

A jury has found defendants Adam Fox and Barry Croft Jr. guilty of conspiring in 2020 to kidnap Michigan Gov. Gretchen Whitmer, a Democrat.

After about nine hours of deliberation over two days, the jury convicted Fox and Croft of conspiracy to commit kidnapping and conspiracy to use a weapon of mass destruction. Croft was also convicted of possession of an unregistered destructive device.

This was the pair’s second trial before U.S. District Court Judge Robert Jonker. Their first trial ended in April with the jury unable to arrive at a unanimous verdict.

During the first trial, two other defendants were found not guilty. Two other men pleaded guilty and testified against Fox and Croft in both trials.

In the second trial, federal prosecutors relied heavily on the testimony of the two plea-bargaining confessors, as well as that of undercover FBI operatives, text messages, and secretly recorded conversations, to make their case.

The defense unsuccessfully contended that Fox, 39, and Croft, 46, were lured into the scheme and were aided in making preparations by FBI agents and paid informants.

Defense attorneys tried to characterize their clients as inept, pot-smoking braggarts who were all talk and no action.

No attempt was made to carry out the plot.

Neither Fox nor Croft testified during the nine-day trial.

In his closing statement, Assistant U.S. Attorney Nils Kessler focused the jury on the defendants’ words. He portrayed Fox and Croft as dangerous revolutionary extremists determined to carry out the kidnapping of Whitmer.

Fox’s lawyer, Christopher Gibbons, told jurors that the defendants had no serious plan, just a lot of crazy ideas and big talk.

Josh Blanchard, Croft’s attorney, reminded the jury that the prosecution didn’t have a single recording in which Croft agreed to take part in the plot.

The convictions carry with them a possible sentence of life in prison.