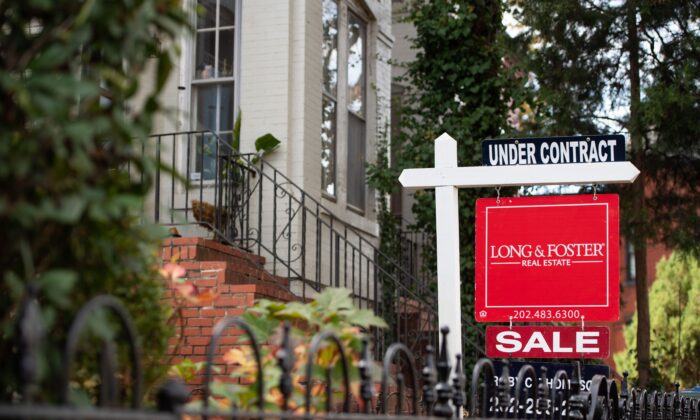 A house for sale is "under contract" in Washington on Nov. 19, 2020. (Saul Loeb/AFP via Getty Images)
Viewpoints

Residential real estate will be pulled in two directions

On the one hand, buying will suffer as rising mortgage rates render home ownership less affordable. On the other hand, ongoing concerns about inflation will drive buyers into real estate, as history shows that it provides inflation protection for their wealth, especially in the face of falling stock and bond prices.

The balance of these forces will likely drive buyers to make purchases but at a lower point on a likely rising price distribution than they would otherwise prefer.

Some of these developing effects are already evident in the available statistics. The Commerce Department reports that while mortgage rates remained low last year, buying surged. In just four months between August 2021 and December 2021, the pace of home buying jumped by 22 percent.

In the first two months of 2022, still-low mortgage rates sustained this high level of sales. True, the statistics show a modest retrenchment of 5.8 percent during January and February, but that was less a sign of weakness than it was a reflection of the usual month-to-month variation in statistics.

Things changed in March, when the Federal Reserve began to act against inflation and started its effort to raise interest rates, including mortgage rates. The affordability of homeownership dropped roughly 24 percent from February’s level to April—the most recent month for which data are available—according to a housing affordability index kept by the National Association of Realtors (NAR). Sales fell with that drop in affordability, so that by April, the rate of sales had more than given up all the gains achieved in the latter part of 2021.

In May, however, sales rebounded, rising 11 percent even as affordability appeared to deteriorate further. This jump could, of course, simply reflect those month-to-month variations in the collection of statistics.

More likely, however, the sales gain reflects the second and contrary force mentioned above—the desire for real estate holdings to protect wealth from financial market declines and inflation’s other ill effects. People, after all, could see by then that housing was beginning to confirm its historic role of providing inflation protection.

The NAR reports that the median price of a home went from rising by about 5 percent in 2021 to a remarkable 10 percent in just the first four months of this year. That more than kept up with inflation. Despite rising mortgage rates, people wanted exposure to this one asset that could keep ahead of inflation.

Statistics show that this effect is evident in other ways as well. In December 2021, when mortgage rates were still low and inflation concerns were just budding, the Commerce Department recorded that a disproportionate number of sales occurred at the higher end of the price distribution.

While the median home price tracked by NAR stood at about $360,000, fully one-third of home purchases nationwide occurred at price points higher than $500,000. Only 29 percent of national purchases occurred at prices near the median. Clearly, low mortgage rates enabled people to reach.

But with the rise in mortgage rates, people began to trade down in the price distribution. As of May, roughly 53 percent of the purchases occurred at prices closely clustered near the median price.

This incipient pattern will likely become more extreme during this second half of the year and into 2023. It could extend for longer in the not unlikely event that inflation persists. Sales at the very top prices will no doubt hold up.

Affordability means less to those who buy in that range, while they have a powerful need to protect wealth from losses in financial markets and the other ravages of inflation. Others who once could reach because of low mortgage rates will trade down closer to the median price, while those who always had to buy at the lower end of the price distribution will be forced out of the market.

Clustering toward the center of the price distribution will likely continue as long as interest rates rise and inflation presents a reason to buy real estate. Only a recession will bring an interruption. Then the negative effects on income and wealth will force a general abatement in the drive to put money into real estate.

There’s another possibility: Inflation abates without a recession, and the Fed consequently takes the pressure off interest rates. However, such a pleasant prospect carries a low probability.