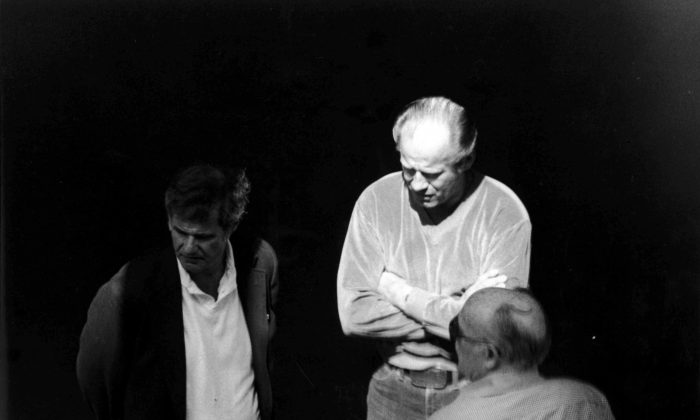 This 1980 black and white surveillance photo released by the U.S. Attorney's Office and presented as evidence during the first day of a trial for James "Whitey" Bulger in U.S. District Court in Boston, June 12, shows Bulger, center, with Ted Berenson, left, and Phil Wagenheim at a Lancaster Street garage in Boston's North End. Bulger is on trial for a long list of crimes, including extortion and playing a role in 19 killings. (AP/U.S. Attorney's Office)
US

BOSTON—If you’re from Boston its hard to imagine anyone not knowing who James ‘Whitey’ Bulger is. The trial for the former mob boss began June 12 at the Moakley Federal Courthouse, not far from Bulger’s old stomping ground in South Boston.

The historically Irish neighborhood of Boston known as ‘Southie,’ became the home of the infamous Winter Hill Gang, which started in Somerville, a working class city near Boston.

For over 30 years the gang flexed their muscles in all areas of city life, from the streets to the capitol building.

James ‘Whitey’ Bulger is on trial as the alleged leader of the Winter Hill Gang. He is charged with 19 murders, and a slew of other crimes including racketeering, extortion, money laundering, drug dealing, and gun stockpiling.

He has pleaded not guilty to each and every one.

At the center of the trial is the question of whether Bulger was an informant for the FBI during his reign and whether or not a connection high up in the FBI ranks was sending him tips for all the years he was on the run.

“I always thought he must be an informant for the FBI. Every time they were about to catch him, poof … he would vanish. I always thought someone had to be tipping him off.” Lynne Chase is no expert, but she’s been around Boston all these years, and like so many has paid attention to the ebb and flow of activity around Bulger.

Chase and her husband Jim Maloney decided to drop by the courthouse to see some of the action while they thought about what movie to see that night.

Here in Boston, it seems like they have been chasing Bulger for a lifetime. All the while, his brother, William ‘Billy’ Bulger, was president of the Massachusetts Senate for 17 years.

In 2003 he was doing an excellent job raising funds for the University of Massachusetts as its president, when he was tossed out after pleading the Fifth in a trial related to his brother Whitey’s criminal activity.

Standing outside the courthouse, Maloney said he remembers when William Bulger stepped down as university president. “It was a shame. He was a good fundraiser. I mean if Billy Bulger walks in to your office and asks you for money, are you really going to say no?”

By the time the trial wound down for the day, a small crowd had gathered. It goes to show just how close to the heart of Boston the whole Bulger story has always been.

It’s been nearly twenty years since the height of Bulger’s reign, yet everybody knows somebody who knows something. Everybody remembers.

The main courtroom on the 5th floor was filled to capacity. The families of the victims turned out in force. Some have been waiting 30 years for justice.

Leaving the courthouse today, Billy Bulger barely glanced at the swarm of cameras and reporters with microphones. He headed straight to his car parked in front of Our Lady of the Good Voyage, the Catholic church across the street.

But there are a number of key people who are willing to testify in the case against Bulger. The first witness brought by the prosecution today was Robert Long, former detective for the Massachusetts State Police.

The prosecution showed surveillance footage from a Lancaster Street Garage taken in 1980. Long hesitantly identified Bulger, holding a knife and speaking with Italian Mafia boss Nick Gezelle and others.

The trial is expected to last until September. With one day down and months left to go, Boston waits with anticipation for the story to unfold, all over again.