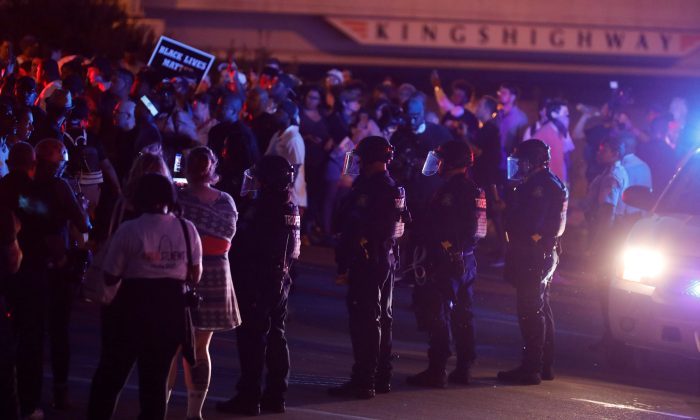 Protesters are blocked by police as they attempt to walk down a ramp to Interstate 64 after the not guilty verdict in the murder trial of Jason Stockley, a former St. Louis police officer, charged with the 2011 shooting of Anthony Lamar Smith, who was black, in St. Louis, Missouri, U.S., September 15, 2017. REUTERS/Whitney Curtis
US

Jason Stockley, the St. Louis police officer who was acquitted of first-degree murder Friday, is sharing his side of the story about what happened when he shot Anthony Lamar Smith on Dec. 20 2011.

Stockley said he never had any hesitation about discussing the case but was prevented by a gag order from the judge.

Stockley, who broke department policy and carried an AK-47 for intimidation purposes, told a reporter with the St. Louis Post Dispatch in an exclusive interview that he was not guilty of murder and relieved by the verdict.

“It feels like a burden has been lifted, but the burden of having to kill someone never really lifts,” he said on Friday, Sept. 15.

“The taking of someone’s life is the most significant thing one can do, and it’s not done lightly. And it’s not something that should ever be celebrated. It’s just a horrible experience altogether. But sometimes it’s necessary,” he said.

In the span of six minutes, Stockley and his partner attempted to block Smith into a parking spot at a Church’s Chicken, Smith swerved his car out of the parking space, nearly hitting Stockley, and raced away. Stockley, carrying an AK-47, shot his department issued handgun at the vehicle, rejoined his partner in their SUV, chased Smith, crashed into him, approached the drivers window and shot Smith.

Stockley described the incident as a “completely reactionary event.”

“If he takes off on car, we follow. He turns left, we turn left. And unfortunately you are reacting in those few seconds, you have to make decisions based on limited information, limited time. And they are the most important decisions you ever make because they could be your last. And it’s very stressful, and in the end, regardless of what happens, nobody wins,” he said.

Stockley said he did not remember uttering that he would kill Smith after he got back in the SUV, saying the first time he heard that was in an interview with the FBI. Nor could he recall the context of the remark. But he said he was certain he had no plan to kill Smith.

Stockley rejected claims that he planted the gun he found in Smith’s car, noting that there were police surrounding the vehicle as he went through it, the rear windows were blown out from the crash, and the driver’s door was open with people looking in as he went through the car.

“I did not murder Anthony Lamar Smith. I did not plant a gun … There was an imminent threat to my life,” said Stockley.
Prosecutors alleged Stockley planted the gun found in Smith’s car after Stockley’s DNA was the only DNA found on it.
Stockley said his main concern had become the first responders who would be face to face with protesters.

“I don’t want anyone to be hurt in any way over this,” sickly said.

Protests began soon after the verdict was handed down with a march toward police headquarters to call for officers’ resignations. While largely peaceful at the start, a Fox2 reporter had three water bottles thrown at him and was surrounded and shoved—one protester confronting him aggressively.

As the night went on, protests turned ugly. Two police officers suffered injuries after bricks were thrown at them and the mayor’s house was damaged by thrown rocks. Police deployed pepper spray after the protest was deemed illegal because it was no longer peaceful.

Stockley, 36, left St. Louis and police work to take a management job at an oil company in Houston, Texas.