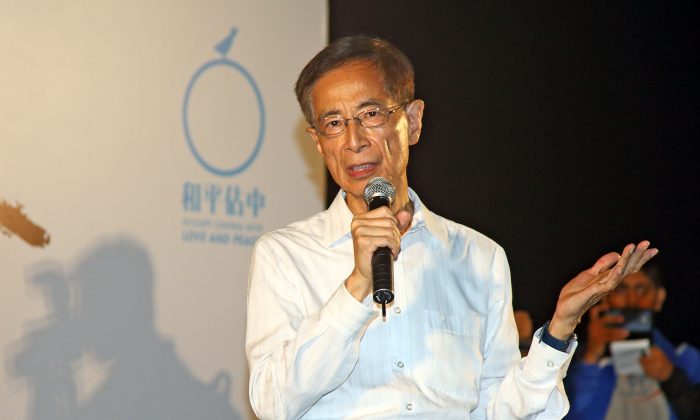 Democratic Party founding chairman, Martin Lee Chu-ming, calls upon Hong Kongers not to give up hope, to fight for democracy, during a rally held on the evening of Aug. 31, 2014. (Poon/Epoch Times)
China

The white paper, issued on June 10, declares that Hong Kong only has as much independence as the Chinese regime allows it to have. The paper infuriated many Hong Kongers who saw it as a threat to the principle of “one country, two systems” that grants Hong Kong a high degree of autonomy from the rest of China.

Wang Zhenmin, professor and dean of the Tsinghua University School of Law, was one of the professors who spoke at the Aug. 28 lunch event hosted by the Hong Kong Foreign Correspondents Club. Wang spoke in support of the white paper as a form of political reform.

“When China and Hong Kong have conflicts of interest, what are the judges supposed to do? He [Wang] could not answer this question. This is what worries the legal profession,” Lee said.

Lee said that the 1997 Joint Declaration that defines “one country, two systems” is an international agreement, and Wang hasn’t explained why they have to use other written publications to define China’s understanding of the Joint Declaration.

As for the interpretation of Hong Kong’s high degree of autonomy, Lee believes this has already been defined in the Joint Declaration.

“Except for defense and foreign affairs, which are dealt with by the central government, the Hong Kong SAR government has the governance right over our executive and legislatures with the judiciary. We exercise our own rights, including the right for the final jurisdiction,” Lee said.

He said the white paper is now withdrawing these rights. “This is very surprising. First they give the SAR a high degree of autonomy, and now they want it back,” he said.

Lee also spoke about the reform proposal on the method for selecting the 2017 Hong Kong chief executive. At the time, the proposal had been submitted to Beijing and Hong Kong was waiting for a decision.

Lee said if the nominating committee for the election is composed of its original four sectors, it is unreasonable. He said that by the 10th year after Hong Kong was handed over to China, democracy was supposed to be in progress, and by 2017 it should become universal suffrage.

Even if a nominating committee is used, Lee believes its members should be elected by universal suffrage. He said that after the CCP’s National People’s Congress Standing Committee (NPCSC) makes the decision on Aug. 31, the negotiations can still continue, but Hong Kongers will not be cheated again.

What the CCP Wants

The reform proposal was drafted by Li Fei, deputy secretary-general of the NPCSC and chairman of Hong Kong’s Basic Law Committee. Senior journalist Ching Cheong said that the consultation on political reform was from the start a fake consultation directed and acted by Li himself.

Every suggestion from democrats and civil groups has been in vain, Ching said. The draft still proposes a fake election based on the principles of patriotism for China and Hong Kong, collective nomination, and collective will.

“It is to ensure that the candidates hand-picked by the CCP will definitely be elected,” Ching said. “On the surface, it seems as if they want Hong Kong people to use the method of ‘one person, one vote’ to approve of their chosen candidates.”

Ching believes it is necessary to end the one-party dictatorship by the CCP in mainland China so that Hong Kong can have a truly democratic election. He said Beijing officials have been stressing “national security,” but this is deceiving Hong Kong people.

He said that when CCP diplomat Qian Qishen visited Hong Kong in 1993, he spoke accurately of the CCP’s desire.

“He [Qian] once said that the pace of Hong Kong’s democratization must not be too fast, or it will affect mainland China. I think these words are exactly what the CCP truly fears,” Ching said. “They do not want to promote democratic reform in the mainland.”