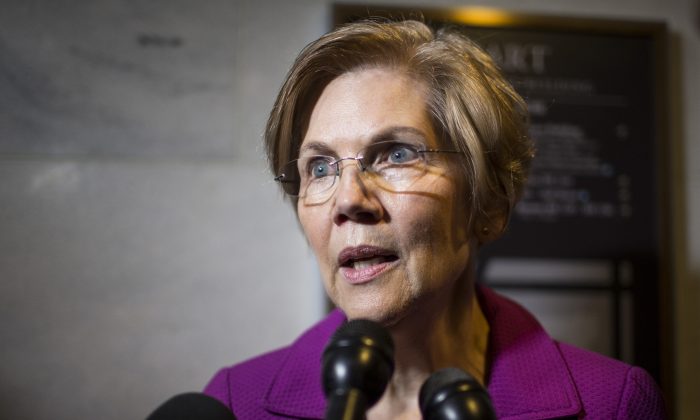 White House: We Would Never Dream of Blaming Warren, Ocasio-Cortez for Terror Attacks

The White House hit back at people trying to blame President Donald Trump for the mass shootings over the weekend, with an aide saying we would never dream of blaming Democratic lawmakers who previous terrorists expressed support for.

A manifesto credited to the alleged El Paso, Texas, shooter included the term “invasion” to describe the thousands of Hispanics who enter the country over the border, a term the Trump administration also uses.

Patrick Crusius also wrote in the manifesto that his opinions predated Trump and that he wasn’t influenced by the president.

But lawmakers across the nation, including leading Democratic presidential candidates, blamed Trump for the shooting, saying his rhetoric about immigrants and immigration have fueled hate crimes and mass shootings.

“There are plenty of people in this country who commit acts of evil in the names of politicians, of celebrities and all types of things. It’s not the politician’s fault when someone acts out their evil intention,” Gidley said.

“We would also never blame Barack Obama for the police shootings in Dallas. We wouldn’t blame Bernie Sanders for the shooting of Steve Scalise or other Republicans. And quite frankly, it’s ridiculous to make those connect in some way. You have to blame the people here who pulled the trigger,” he continued.

The alleged Dayton shooter also used the term “concentration camps” to refer to immigration detention facilities, a description popularized by Ocasio-Cortez and also used by an Antifa member who attacked an Immigration and Customs Enforcement facility in Washington state last month.

The Sanders reference is to a Sanders supporter, James Hodgkinson, who shot at Republican Congressmembers on June 14, 2017. He hit four people, including Rep. Steve Scalise (R-La.) before being shot by police officers and dying nine days later.

The Virginia Attorney General concluded, in a review (pdf) of police force used that day, that Hodgkinson’s attack was “an act of terrorism…fueled by rage against Republican legislators”

Asked about former Texas Rep. Beto O’Rourke, who is running for president, blaming Trump for the El Paso shooting, acting White House chief of staff Mick Mulvaney made a similar point during an appearance on ABC over the weekend.

“Here’s the question you could ask Beto—and I would if he were sitting here. It’s a fair question I think to ask. Which is, look, did anyone blame Bernie Sanders for the Congressional baseball game shooting? No, I don’t think so. Did anyone blame Alexandria Ocasio-Cortez for the gentleman—gentleman—for the crazy guy who tried to blow up the DHS office in Washington state, taking I think a homemade bomb and an AR-15 to shoot up what he called a concentration camp, the exact same rhetoric that AOC was using? Did anybody blame her?” Mulvaney wondered.

“There’s no benefit here to trying to make this a political issue. This is a social issue and we need to address it as that,” he added.