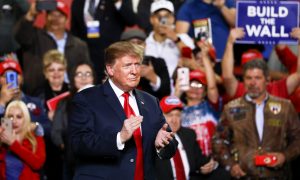 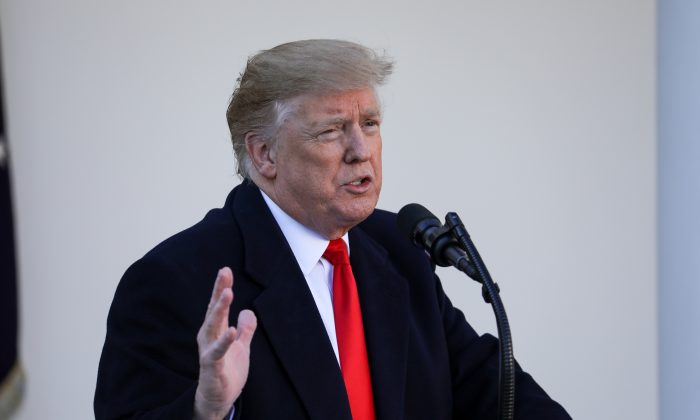 UPDATE: The bill passed in the House on Thursday night, securing 300 to 128 votes, and will now head to President Trump’s desk for signing on Friday morning.

President Donald Trump will declare a national emergency to secure funds for the physical barrier along the U.S.–Mexico border, while at the same time, signing legislation to prevent another government shutdown from occurring, the White House said on Feb. 14.

The deadline to avoid a second partial federal shutdown is Feb. 15.

“President Trump will sign the government funding bill, and as he has stated before, he will also take other executive action—including a national emergency—to ensure we stop the national security and humanitarian crisis at the border,” White House press secretary Sarah Sanders said in a statement.

“The President is once again delivering on his promise to build the wall, protect the border, and secure our great country.”

The White House announcement came moments after Senate Majority Leader Mitch McConnell spoke on the Senate floor, saying he had just spoken to Trump, who was prepared to sign the bill. McConnell said he would stand behind the president’s decision.

The Trump administration will avoid the financial turmoil of about 800,000 federal workers working without pay or going on unpaid leave because of another partial government shutdown. But the national emergency declaration could create more complications, with potential lawsuits over Trump’s authority as president to make such a move.

When asked if the White House is prepared for such legal challenges, Sanders said, “We’re very prepared, but there shouldn’t be [legal challenges]. The president’s doing his job. Congress should do theirs.”

She said the White House will make an announcement later with more details on the declaration.

Trump will sign a congressional deal that will bring almost $1.4 billion in funding for physical border barriers—significantly less money than Trump’s requested $5.7 billion in funding. Negotiators in Washington reached an agreement in principle on Feb. 12 to fund the government ahead of the deadline. The funding measure is through the fiscal year, which ends Sept. 30.

On Feb. 11, Trump went to El Paso, Texas, to make the case again that walls work in stopping crime. Democrats frequently argued that a wall is “ineffective,” with Pelosi going as far as saying it is “immoral.” In fiscal year 2018, almost 400,000 aliens were apprehended by Border Patrol after crossing the Southwest border illegally.

Trump had been the only side to offer a compromise throughout the first partial government shutdown. At the time, Democrats refused to budge from their initial $1.3 billion offer for border-security purposes, which didn’t include funds for a border wall. Currently, about 654 miles of barrier exists along the nearly 2,000-mile U.S.–Mexico border.