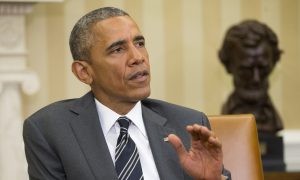 WASHINGTON—President Barack Obama and his legislative allies scrambled Monday to try to revive his severely wounded trade agenda, although Democrats and Republicans alike said all options have serious hurdles.

Obama’s chief of staff, Denis McDonough, spoke with Rep. Nancy Pelosi, the House Democratic leader whose rejection of Obama’s pleas on Friday capped the stunning setback delivered mainly by the president’s own party. Details of the conversation weren’t immediately available. The White House said Obama himself was likely to speak with House Speaker John Boehner (R-Ohio).

The House majority leader said Congress must find a way to pass Obama’s trade agenda, but he acknowledged there’s no obvious pathway.

Republican Rep. Kevin McCarthy of California told reporters “there are many different options” to revive the trade package the House derailed last week. He said a new vote could come as early as this week, but Republican leaders first must survey the political and legislative landscapes.

Obama seeks “fast track” negotiating authority, which previous presidents have had. It allows the president to send Congress proposed trade agreements that lawmakers can ratify or reject, but not change. Obama says U.S. products must reach wider markets.

To derail fast track, scores of Democrats voted Friday to kill a program they’ve embraced for years, which gives federal aid to workers displaced by international trade. The Senate had combined fast track and the aid program into one bill, enabling House Democrats to bring down the entire package by killing the aid program, which most Republicans oppose to begin with.

McCarthy and others have proposed several possible ways to revive the package, although all carry serious challenges.

McCarthy said the best solution is for House Democrats to reverse course and approve the entire legislative package—including fast track and the displaced worker aid—and let Obama sign it into law. Many Democrats say that’s unlikely.

Another possibility is to try to pass fast track alone, perhaps with nearly 30 Democratic votes and enough Republicans to supply the rest. But that would require the legislation to go back to the Senate, where the package narrowly passed after a lengthy and bitter struggle. Obama’s allies are extremely reluctant to give Senate opponents another chance to kill it.

McCarthy didn’t rule out that possibility, however. “It would have to go back to the Senate,” he said, if the House approves a fast track bill that strips out the worker aid program.

Republicans historically have supported free-trade agreements, while Democrats have grown increasingly hostile. But on Friday, 54 House Republicans voted against Obama’s bid for fast track authority even when the worker aid program—seen by many as a sop to the unions—was not attached.

The congressional impasse jeopardizes hopes to complete the 12-nation Trans-Pacific Partnership that the United States and 11 other nations have been negotiating for years.