White House to Impose Tariffs on $50 Billion of Chinese Goods 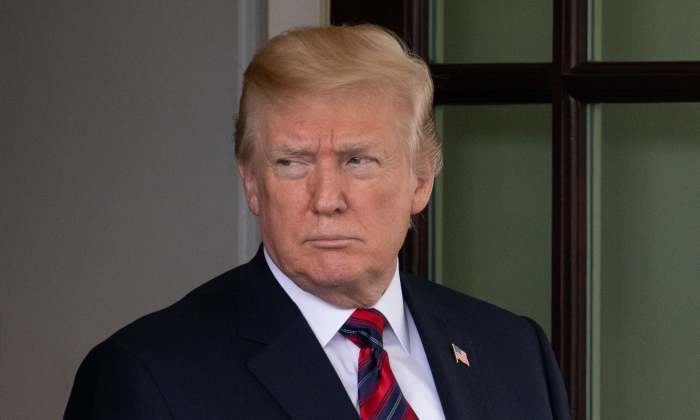 President Donald Trump participates in the departure of Moon Jae-in, President of the Republic of Korea, at the White House in Washington on May 22, 2018. (Samira Bouaou/The Epoch Times)
By Ivan Pentchoukov

The United States will levy a 25 percent tariff on $50 billion of goods imported from China, the White House announced on Tuesday, May 29.

The tariff will apply to products “containing industrially significant technology.” The Trump administration has collected feedback from consumers on potential items and the final list will be announced by June 15.

“From now on, we expect trading relationships to be fair and to be reciprocal,” President Donald Trump said in a statement.

Trump has long said that China has taken advantage of the United States with unfair trade practices, including industrial subsidies and prohibitive trade barriers. The communist regime has also engaged in rampant intellectual property theft. Trump is using trade negotiations to recoup the losses.

The announcement comes as a surprise since Treasury Secretary Steven Mnuchin said earlier this month that the imposition of tariffs would be suspended as American negotiators continued trade talks with their Chinese counterparts.

The White House initially proposed $150 billion in tariffs. The reduction to $50 billion is a sign of Trump’s standard approach to negotiations: ask for way more than you can get and settle for a better deal than most would deem possible.

The United States Trade Representative will also continue a dispute settlement with the World Trade Organization (WTO) against China. The dispute was initiated in March over Beijing’s “discriminatory technology licensing requirements,” the White House said.

The Trump administration has already won a WTO trade dispute with China in February. As a result, China terminated “unfair antidumping and countervailing duties” on poultry exports, according to the White House.

The United States is also preparing to implement investment restrictions and export controls meant to restrict access of Chinese people and companies to American technology. The list of restrictions will be announced by June 30, the White House said.

Last week Trump said he had reached a deal to let Chinese telecommunications firm ZTE stay in business. Trump has said that ZTE is part of the larger trade talks.

The United States imposed crippling sanctions on ZTE due to national security concerns. The impact of the sanctions prompted a personal plea from Chinese Premier Xi Jinping for Trump to step in.