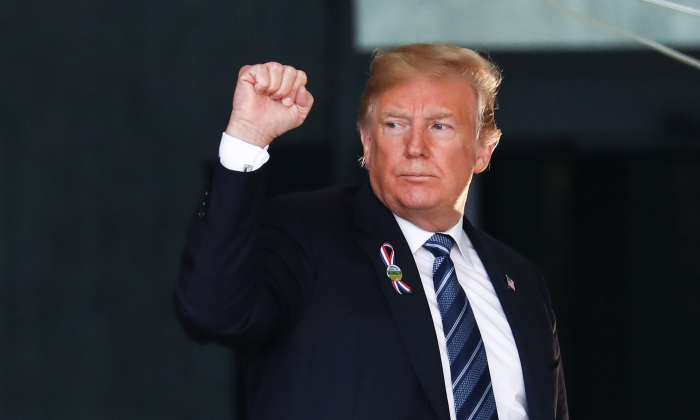 Trump Signs Order That Would Authorize Sanctions for Election Interference

President Donald Trump signed an executive order on Sept. 12 directing the government to impose automatic sanctions on foreign individuals, entities, and nations in retaliation for attempts to interfere in U.S. elections.

The president declared a national emergency to deal with election meddling. The order states that foreign interference poses “an unusual and extraordinary threat” to America’s national security and foreign policy.

“Although there has been no evidence of a foreign power altering the outcome or vote tabulation in any United States election, foreign powers have historically sought to exploit America’s free and open political system,” Trump wrote in the order.

“In recent years, the proliferation of digital devices and internet-based communications has created significant vulnerabilities and magnified the scope and intensity of the threat of foreign interference, as illustrated in the 2017 Intelligence Community Assessment.”

National security adviser John Bolton and Director of National Intelligence Dan Coats announced the details of the order shortly before it was made public. With less than two months before the crucial 2018 midterm elections in November, Bolton described the order as an additional layer of defense against election meddling.

“We felt it was important to demonstrate that the president has taken command of this issue, that it’s something he cares deeply about, that the integrity of our elections and our constitutional process are a high priority to him,” Bolton said. “And so this order, I think, is a further demonstration of that.”

U.S. officials say the intensity of foreign influence is lower this year than in 2016, when Russia attempted to interfere in the presidential election. But the threat isn’t limited to Moscow, according to Coats, who said China, Iran, and North Korea have shown they have the capability to interfere.

The order counts the distribution of propaganda and disinformation as attempts at interference. Russia used both tools in 2016 to sow division among Americans online.

“We’ve learned lessons from this obviously. Our focus now is on the midterms and 2020 going forward,” Coats said. “What do we need to have in place to deal with this, to ensure the American public that their elections have not been manipulated; their vote has not been changed?”

The order gives the Office of the Director of National Intelligence (ODNI) a 45-day window after an election to assess whether influence attempts took place. Once complete, the ODNI would deliver the assessment to the to the president, attorney general, and the secretaries of treasury, state, defense, and homeland security.

“The sanctions authorized by today’s Executive Order are an important tool to deter and punish any foreign interference in our elections, including the upcoming midterm elections,” Sen. Orrin Hatch (R-Utah) wrote on Twitter. “This is not a panacea for our foreign adversaries’ unprecedented efforts to undermine our democratic institutions, but I applaud the Administration’s continued efforts to protect the integrity of our elections.”

The drafting and signing of the executive order had “zero” to do with the media narrative that Trump is deferential to Russia, according to Bolton. Democrats in Congress have continued to push the narrative that the president is lax with Moscow despite tough steps from the White House to punish Russia for destabilizing activity in the United States and around the world.

“It’s a fantasy to think that this president hasn’t held the Moscow accountable for its maligned activities,” said Alex Titus, a policy advisor for America First Policies. “Sanctions have been placed on key Russian firms and oligarchs, dozens of Russian spies have been expelled from the US, and Trump upended the Obama-era decision to withhold military support from Ukraine.”

In May last year, Trump signed an executive order directing the government to strengthen and modernize cybersecurity in critical infrastructure. During the 2017 elections, the administration provided states with on-site cybersecurity support. In March, Congress authorized $380 million in grants for election assistance.

The DHS is already working with all 50 states, local governments, and private companies to enhance election security, according to the White House. The department is planning to conduct election vulnerability assessments in every state that requests help. As of mid-July, the department completed assessments in 16 states. In August, DHS conducted the first-of-its-kind National Election Cybersecurity Table Top Exercise.

“I fully support [the president’s] executive order to impose stronger sanctions on those who meddle in our elections,” Secretary of State Kjirsten Nielsen wrote on Twitter. “Complacency will be replaced [with] consequences. Fair elections are the cornerstone of our democracy & securing our election infrastructure is a top priority for the Federal [government].”

I fully support @POTUS’ executive order to impose stronger sanctions on those who meddle in our elections. Complacency will be replaced w consequences. Fair elections are the cornerstone of our democracy & securing our election infrastructure is a top priority for the Federal gov

The FBI and Department of Justice (DOJ) are actively working to disrupt meddling attempts and notify the victims and targets. During the midterm elections, the FBI and DOJ will host a live Election Day watch to monitor and coordinate election-day work.

The Trump administration has ordered successive waves of sanctions and expulsions against Russia in response to Moscow’s malign activity in the United States and abroad.