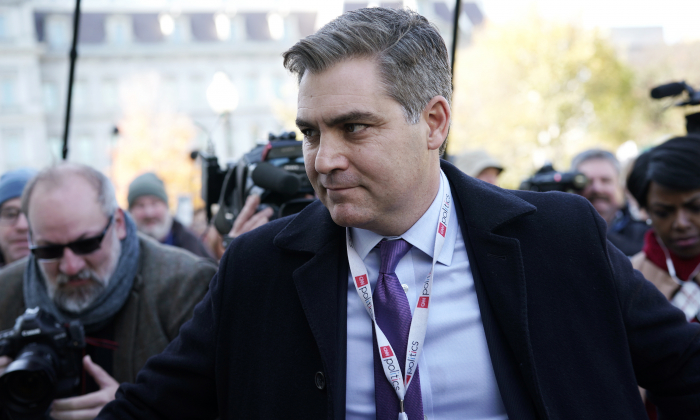 The White House fully restored the press credentials for CNN correspondent Jim Acosta on Nov. 19 and issued a set of rules guiding the conduct of journalists at press conferences, according to a statement from press secretary Sarah Sanders.

“We have created these rules with a degree of regret. For years, members of the White House press corps have attended countless press events with the president and other officials without engaging in the behavior Mr. Acosta displayed at the November 7, 2018, press conference,” Sanders said.

The new rules include: limiting questions to one per reporter; if a reporter has a follow-up question, the official taking the question would have the discretion about whether to grant the follow-up query; and after which, the reporter is expected to yield the floor, which includes surrendering the microphone to White House staff. Failure to abide by any of the three rules may result in suspension or revocation of a reporter’s hard pass.

“We would have greatly preferred to continue hosting White House press conferences in reliance on a set of understood professional norms, and we believe the overwhelming majority of journalists covering the White House share that preference. But, given the position taken by CNN, we now feel obligated to replace previously shared practices with explicit rules,” Sanders said.

The White House revoked Acosta’s hard pass on Nov. 7 after he physically refused to yield the floor to his colleagues and made physical contact with an intern who attempted to retrieve the White House microphone. CNN filed a lawsuit Nov. 13 and a judge ordered three days later that Acosta’s credentials should be temporarily restored while the lawsuit is pending.

Over the weekend, the White House appeared to double-down on its efforts to strip Acosta’s press pass, serving the correspondent with a letter that informed him a preliminary decision has been made to withdraw his credentials. But the White House changed course before the 3 p.m. deadline on Nov. 19, and announced that Acosta will retain his hard pass.

“Thanks to everybody for their support. As I said last Friday … let’s get back to work,” Acosta wrote on Twitter.

According to a Nov. 19 court filing (pdf), CNN and the White House Correspondents’ Association attempted to resolve the dispute with the White House by working cooperatively on a set of protocols for White House press conferences.

“President Trump believes strongly in the First Amendment, and a free press and is the most accessible president in modern history,” Sanders said. “It would be a great loss for all if, instead of relying on the professionalism of White House journalists, we were compelled to devise a lengthy and detailed code of conduct for White House events.”

Shortly after the White House’s announcement, CNN’s communications office said that the company intends to drop its lawsuit against the president.

“We look forward to continuing to cover the White House,” the network posted on Twitter.

U.S. District Judge Timothy Kelly only ruled on the violation of Acosta’s due process rights; he did not issue a ruling on the claim that the revocation of his credential constituted a violation of the right to free speech.

The New York Times and Fox News both sided with CNN in the lawsuit. One America News Network sided with the White House.