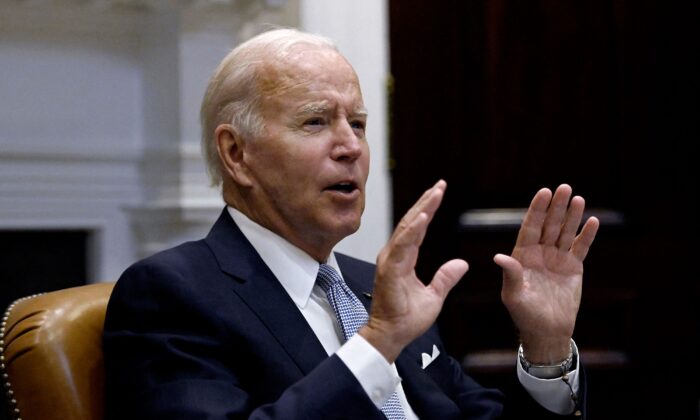 President Joe Biden attends a meeting in the Roosevelt Room at the White House in Washington on Aug. 26, 2022. (Olivier Douliery/AFP via Getty Images)
Policies & Impacts

Biden announced last month that he would cancel as much as $20,000 in federal student debt for Pell Grant recipients and $10,000 for other borrowers making less than $125,000 annually.

The move has sparked concern among Republican lawmakers and other experts, who fear it could raise national debt at a time when inflation has soared across the country.

Speaking about the debt cancellation program at a press briefing on Aug. 26, Bharat Ramamurti, deputy director of the National Economic Council, said: “It is paid for and far more by the amount of deficit reduction that we’re already on track for this year.”

“We’re on track for $1.7 trillion in deficit reduction this year. That means, practically speaking, compared to the previous year, 1.7 trillion more dollars are coming into the Treasury than are going out. And we’re using a portion of that—a very small portion of it—to provide relief to middle-class families, consistent with the president’s plan.”

“So, yes, we consider it fully paid for,” Ramamurti added.

According to the Congressional Budget Office (CBO), the federal deficit stood at $727 billion in the first 10 months of the fiscal year 2022, down from the $2.5 trillion deficit over the same period in the financial year 2021.

That is largely down to the Biden administration’s decision to phase out COVID-19-related spending programs that were initially put in place at the start of the pandemic.

However, the deficit is still by no means small and in July alone, it ran at $212 billion, according to the CBO, with the government receiving $272 billion in receipts but splashing out $484 billion on spending, which marks the second largest single month deficit this fiscal year.

Experts say that paying for the student debt cancellation program out of the drop in deficit will simply worsen the national debt and increase inflation while further burdening taxpayers.

“They’re just looking for any story they can tell that lets them get away from the fact that they’re making the nation’s finances worse,” Marc Goldwein, senior policy director at the nonpartisan Committee for a Responsible Federal Budget, told Fox News. “This is going to worsen the deficit. There is no way to dance around it.”

The Penn Wharton Budget Model, a nonpartisan group at the University of Pennsylvania’s Wharton School of Business, has estimated that Biden’s student loan forgiveness program will cost between $469 billion to $519 billion over the next decade.

Elsewhere Republicans on the House Budget Committee believe it will cost U.S. taxpayers more than $330 billion and that 70 percent of those who benefit from the plan would be in the “top half of the income spectrum.”

Brian Riedl, a senior fellow in economics at the center-right Manhattan Institute, told Fox News: “If this ends up being added to the national debt, it’s just going to drive up the interest costs needed to not default on that figure. All of that is eventually going to drive up taxes because, at some point, you’ll have to figure out a way to pay that debt.”

For its part, though, the Biden administration, which is also extending a freeze on student loan payments through the end of the year, has remained adamant that the relief program will not further stoke inflation or require taxpayers to fork out more as it remains on track for $1.7 trillion in deficit reduction.

However, it is yet to provide an official figure regarding the plan’s exact costs and Americans will have to wait until winter at the earliest, according to the White House budget office.