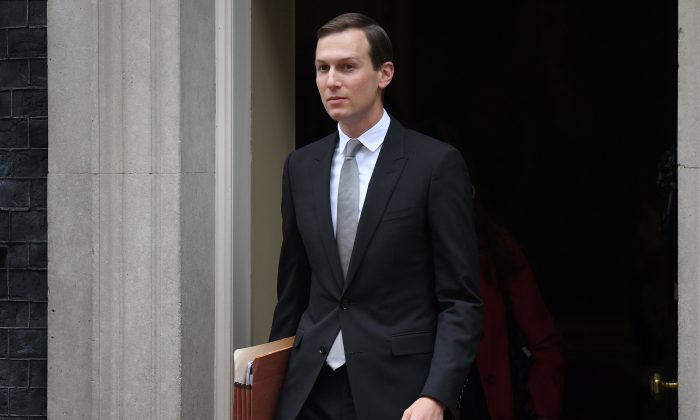 The White House on June 22 announced details of an economic plan for the Middle East that could create more than $50 billion in new investments over a 10-year period.

The new plan, titled “Peace to Prosperity,” describes itself as a vision “to empower the Palestinian people,” and aims at unleashing the territories’ economic potential and enhancing their governance. It would create a global investment fund to lift the Palestinian and neighboring Arab states’ economies, and fund a $5 billion transportation corridor to connect the West Bank and Gaza.

White House senior adviser Jared Kushner is set to present the plan at an international conference in Bahrain next week. The plan includes 179 infrastructure and business projects, according to details of the plan and interviews with U.S. officials, Reuters reported.

The ambitious economic revival plan, the product of two years of work by Kushner and other aides, would take place only if a political solution to the region’s long-running problems is reached.

More than half of the $50 billion would be spent in the economically troubled Palestinian territories, while the rest would be split between Egypt, Lebanon, and Jordan. Some of the projects would be in Egypt’s Sinai peninsula, where investments could benefit Palestinians living in adjacent Gaza, a crowded and impoverished coastal enclave.

According to an overview, the goals of the plan are achievable if there is support from the international community.

“Ultimately, however, the power to unlock it lies in the hands of the Palestinian people. Only through peace can the Palestinians achieve prosperity,” it stated.

The Trump administration hopes that wealthy Gulf states and nations in Europe and Asia, along with private investors, would foot much of the bill, Kushner told Reuters television.

“The whole notion here is that we want people to agree on the plan and then we’ll have a discussion with people to see who is interested in potentially doing what,” Kushner said.

Kushner said some Palestinian business executives have confirmed their participation in the conference, but he declined to identify them.

Several Gulf Arab states, including Saudi Arabia, will also participate in the June 25–26 U.S.-led gathering in Bahrain’s capital, Manama, for Kushner’s rollout of the first phase of the peace plan. Kushner stressed that governments wouldn’t be expected to make financial pledges on the spot.

In a statement, President Donald Trump said he was committed to working out an agreement that would achieve peace between the Israelis and the Palestinians, adding that he intends “to do everything I can to help them achieve that goal.”

Kushner told Reuters his approach is aimed at laying out economic incentives to show the Palestinians the potential for a prosperous future if they return to the table to negotiate a peace deal.