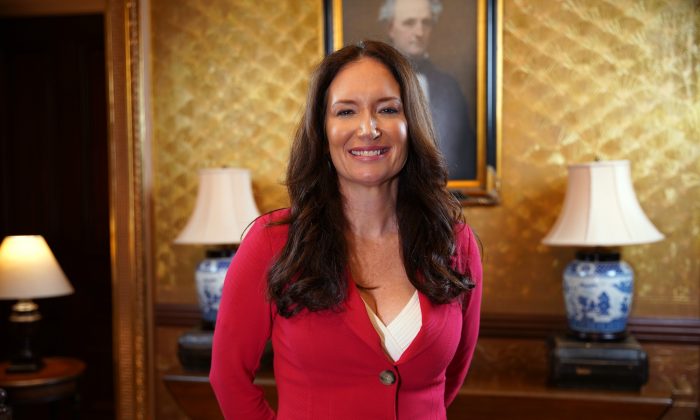 “This president, my boss … I believe he will go down in history as having done more for all Americans, but especially for those … from impoverished communities, for those living at the margins of society,” Brooke Rollins, a senior official in the Trump administration, said in an interview with The Epoch Times’ “American Thought Leaders.”

Rollins currently leads the Office of American Innovation, which works with different offices of the White House as well as the private sector to make policy recommendations to President Donald Trump to deal with America’s most critical and intractable problems.

“On the innovation front, it really is about what can we do in our finite amount of time to fundamentally change the direction of the United States of America, to ensure that every man, woman, and child has a real shot at the American dream,” she said.

To achieve this, the administration has fought to strengthen the economy; increase skills training, educational opportunities, and school choice; achieve criminal justice reform; and lower unemployment rates. Millions of Americans are no longer on food stamps, unemployment among Black Americans has fallen to record lows, and veterans have been given significantly more benefits, including options for private health care.

“It is putting the other side into an all-out panic,” Rollins argued. “They can’t fight us on policy,” so the other side has “downgraded their arguments to vile and disgusting characterizations.”

“The good news is we have our record to show what we’re doing for every American,” Rollins said. “It is our side and what we have done that’s truly bringing change to these communities.”

Inside The Trump White House

Prior to joining the Trump administration in February 2018, Rollins was president and CEO of the Texas Public Policy Foundation, a conservative think tank.

“There are many unexpected blessings of working for Donald Trump,” Rollins said. “What I didn’t necessarily expect was how joyful it would be. And I think so much of that joy comes from everyone I work with every day, whether it’s the president, the vice president, Ivanka Trump, who is extraordinary, her husband, Jared Kushner, who is equally as extraordinary, [and] my friend of 20 years, Kellyanne Conway. … This team of people is coming in every single day fighting for this country.”

It’s a unique administration, “led by a private businessman who’s never been elected to office before” and composed of individuals who, “just like the Founding Fathers intended, have left our farms [and] come to Washington to serve for a couple of years,” she said. “That is a very different mindset than most other presidencies and most other administrations.”

Even though the stakes are high, she hasn’t found the people to be mean, competitive, or territorial, as one might expect: “I have found it to be an environment where everyone truly wants what’s best and everyone truly respects and loves each other.”

Whenever policy disagreements emerge, the president is there to listen: “He wants to learn, and then he makes a decision, and we’re all back off to the races,” she said.

As the mother of four, Rollins especially cherishes spending time with her many female colleagues who also juggle work and motherhood, including Ivanka Trump, the mother of three; Mercedes Schlapp, who has five daughters; Conway, who has four young children; and Stephanie Grisham, who has two boys.

“I don’t know that there has been another president with this senior of a team that has so many working moms,” she said. “We wish America could know that there is no one who’s been more supportive of us … than the president.”

Trump, she said, “was willing to put aside a very successful life and say, ‘I’m going to go to D.C., and I’m going to shake things up.’”

America: ‘A Country of Second Chances’

Rollins was an early advocate for reform, and worked with the administration in designing Trump’s proposed criminal justice reform prior to joining the Office of American Innovation.

In Texas, “we closed eight prisons over 10 years,” Rollins said, as well as 11 juvenile facilities. Texas was then able to redirect the money toward rehabilitation, drug courts, and the veteran community, which makes up a significant portion of the prison population.

“And, in that time, our crime rate decreased 30 percent. So it actually worked. And that’s the great thing, too, about this country, the laboratories of democracy.” Texas was the first to adopt large-scale criminal justice reform, and other states like Georgia and Kentucky followed.

At the national level, the First Step Act was the fruit of the administration’s efforts. It was a major bipartisan win that focused on helping formerly incarcerated individuals reintegrate into society, families, and workplaces. The goal was to improve the outcomes for those individuals, while also making those communities safer.

Plans are in the works, Rollins said, for additional steps beyond the First Step. They will focus on second-chance hiring, overcrowding in local jails, and broader issues such as mental health and homelessness. Ninety percent of America’s inmates are actually in the state and local system, not the federal system, “so the second step actually is also moving back to the states,” Rollins added.

In May, Trump unveiled his proposal for a major overhaul of the legal immigration system, to create a more merit-based system. It shifts away from the random visa lottery and chain migration and toward a merit and points-based system that ranks candidates based on age, education level, and technical skills.

Rethinking the entire system was a risky and challenging move, but Trump was willing to take that step to thoroughly overhaul America’s outdated immigration system, she said.

“When you look at the rest of the world, especially Australia, Canada, New Zealand, Japan, their immigration system … is very simple and easy to figure out. You get on the computer and it takes about an hour. You don’t need an immigration lawyer. There’s not pages and pages of convoluted rules, multiple agencies involved, to hire someone to pick apples from a tree,” she said.

“So what happens is brothers and cousins and sisters and aunts and uncles are able to come across and have priority over those who want to come to be an American citizen and to produce and provide for this country,” Rollins said.

The goal is to create a simplified system that offers legal status to people who can contribute to America’s economy: “Any kid from Uganda or Guatemala or Chile, if they’re 10 years old and they know they want to be an American citizen, they can get on the computer and figure out exactly what they need to do that.”

“I think it’s Australia, with this exact same system, has not had a recession in 26 years. And the reason is because they have set up and structured their immigration system so that they have the people coming into the country that can keep the economy moving forward and don’t necessarily come in and immediately become part of our welfare system,” she said.

The current border crisis, in Rollins’s view, has been driven by “false incentives” that have misled many families into making the treacherous journey north.

The United States, Rollins said, must be seen as a “safe, secure, fair system where, if you get into a caravan and you pay someone $5,000, you’re not going to get into this country.” However, with a merit-based system, people will know exactly what they what line they have to stand in to seek eligibility for legal immigration.

“The great thing about the Trump economy is that we have more jobs available than workers available. And the president has said this multiple times: We need more workers. But we have to do it in a fair and just way and one that makes sense for this country,” she said.

“We hope we may be able to get this done before Congress leaves next year and we have another election. But if we can’t, then it’s something that we’ll really look to prioritize in January 2021,” Rollins says.

The left isn’t “beating us on policy, so they’re resorting to name-calling,” Rollins said.

“The ‘concentration camps’—the term that they’re using—were all built under a prior administration. We didn’t even build those. But the pictures in the media and the narrative in the media again is geared toward trying to persuade Americans that we’re not here fighting for them,” Rollins said, in reference to Rep. Alexandria Ocasio-Cortez’s (D-N.Y.) comparison of U.S. border facilities with “concentration camps.”

“I am such a believer in relentless optimism, and that, in the face of withering and unfair and untruthful attacks, we just keep powering forward,” she said.

The president, she said, has been “looking right past the reporters and talking right to the American people, and he refuses to give up. I think a lot of other men or women in his spot would just be so tired of it and beaten down. And for President Trump, it almost gives him more conviction to keep fighting.”

“The fact that this president’s approval rating is almost 15 points higher than Ronald Reagan’s was at this point in his first term … in the wake of this unmitigated attack, attack, attack, it means that we’re getting our message out,” Rollins said.

“The American dream, at least for now, has been saved,” Rollins said, and “my children and your children and our future grandchildren still have a chance to build a life for themselves that is unlike anywhere in the world.”

“And I think that history will judge it in that way, and look back at this man and this team of people and see the good that was done for all Americans, but especially African Americans, Hispanics, our disabled community, our veteran community—what was done for those who have long been forgotten,” Rollins said.

“I come from a really small town in Texas. I grew up in rural Texas. I studied agriculture at Texas A&M, was raised by a single mom. Nowhere but America would I one day end up in the West Wing of the White House, advising the most powerful man in the world. That doesn’t happen anywhere else other than this country,” Rollins said.

And that, she said, is what the president is bringing back to America.

Views expressed in this article are the opinions of the interviewee and do not necessarily reflect the views of The Epoch Times.