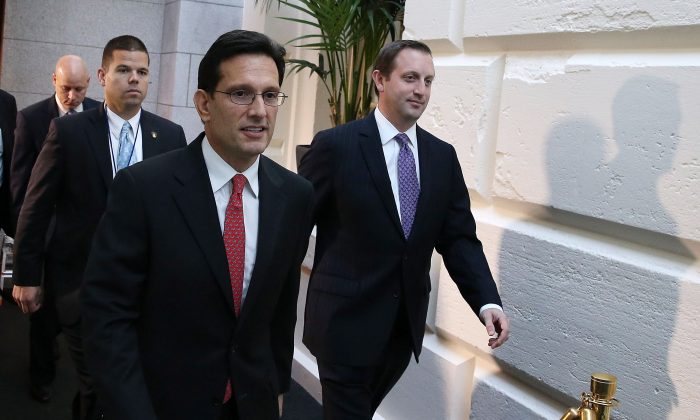 House Majority Leader Eric Cantor (R-VA) (2nd R) walks to a Republican caucus meeting at the U.S. Capitol, Oct. 15, 2013 in Washington, D.C. With the government shutdown going into the fifteenth day and the deadline for raising the debt ceiling fast approaching, Democrats and Republicans are working to come to an agreement soon on passing a budget. (Mark Wilson/Getty Images)
Politics

WASHINGTON—The White House says the latest proposal from House Republican leaders for reopening the government and extending the nation’s borrowing cap is a partisan effort to appease tea party conservatives. It praises bipartisan negotiations in the Senate as a good-faith effort to end the partial government shutdown and avoid an economy-shaking default.

The White House also announced it will meet with House Democratic leaders Tuesday afternoon as negotiations continue and a deadline to raise the debt ceiling moves ever closer.

White House spokeswoman Amy Brundage says a proposal from House GOP leaders that would attach health care law changes to shut-down and debt ceiling measures is a, quote, “partisan attempt to appease a small group of tea party Republicans who forced the government shut down in the first place.”