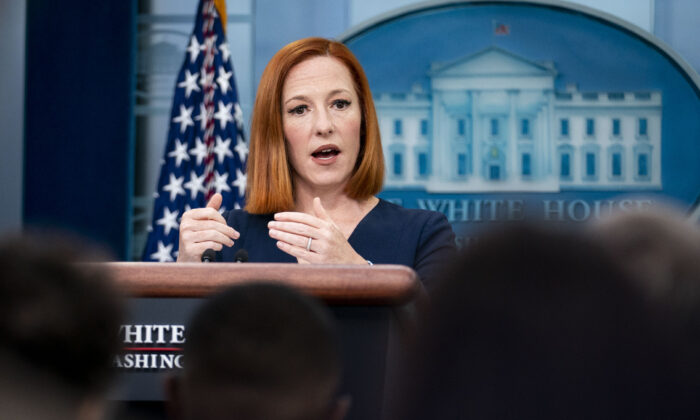 White House Has Not Studied How Forgiving Student Loans May Impact Inflation: Psaki

The Biden administration is weighing up using income to determine eligibility as part of a potential plan to cancel hundreds of millions of dollars of federal student loan debt but has not yet analyzed how it would impact inflation, the White House said Monday.

Biden promised during his 2020 presidential campaign that he would cancel $10,000 debt for each borrower.

An analysis by the Federal Reserve Bank of New York says that doing so would translate to canceling $321 billion in federal student loans, or the entire balance for 11.8 million borrowers.

Last week, the president floated that idea again, which would possibly be through executive action, although it is unclear if he has the legal authority to do so.

During a White House press briefing on Monday, press secretary Jen Psaki was asked whether an income cap for any potential student relief program was being considered.

“There is,” Psaki said. “And he has talked about that back to when he ran for president,” she noted.

Psaki stressed that income caps would ensure that the relief is “targeted to those graduates who have the greatest need” but noted that the White House is not yet “at the point where we have a final proposal or a final executive action or anything along those lines.”

Biden said on Thursday that he was considering canceling “some” outstanding federal student loan debt, but ruled out a proposal by some Democratic lawmakers, including Senate Majority Leader Chuck Schumer (D-N.Y.) to erase $50,000 in debt for each borrower.

“I am not considering $50,000 in debt reduction, but I’m in the process of taking a hard look at whether there will be debt forgiveness, and I’ll have an answer in the next couple of weeks,” Biden said at a White House press conference.

Prior to his comments, Schumer reportedly said that Biden was “getting closer” to a $50,000 blanket forgiveness for all borrowers, something that he and other Democrats, including Sen. Elizabeth Warren (D-Mass.) and Reps. Ayanna Pressley (D-Mass.) and Ilhan Omar (D-Minn.), have advocated for.

The Senate majority leader has called on Biden to use his executive power to cancel the thousands of dollars in loan debt and to ensure that the canceled debt won’t be treated as taxable income.

However, critics fear such a program could further worsen inflation, currently at a 40-year high in the United States.

Psaki was also asked on Monday whether or not the Biden administration has analyzed how much student loan forgiveness would impact already sky-high inflation.

“I know there’s been outside analysis of that, but I don’t have any internal analysis at this point to preview for you,” she responded.

Republican senators last week pushed for legislation aimed at preventing Biden from rolling out such a plan.

“Taxpayers and working families should not be responsible for continuing to bear the costs associated with this suspension of repayment,” Thune said in a statement. “This common-sense legislation would protect taxpayers and prevent President Biden from suspending federal student loan repayments in perpetuity. Any future suspension of federal student loan repayments should be left to Congress, not the Biden administration.”