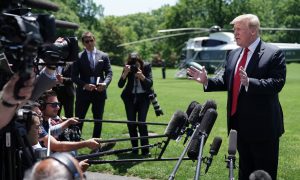 Trump: Mexico Is 'Abuser' of the US; 'America Has Had Enough!'
0
Share Now
TelegramFacebookTweetEmailTellMeWeReddit
Copy Link 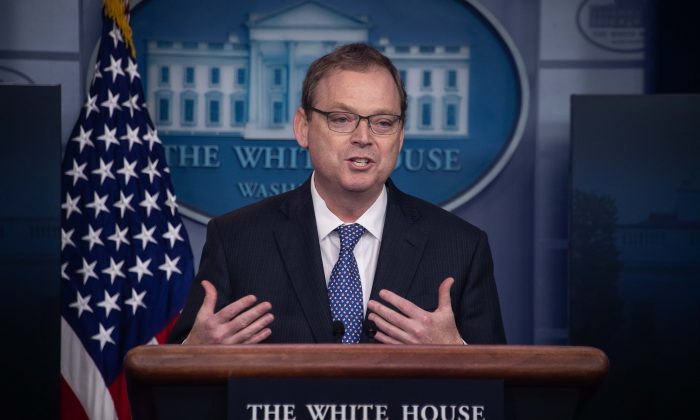 Kevin Hassett, chairman of the Council of Economic Advisers, speaks during a briefing at the White House in Washington on Sept. 10, 2018. (NICHOLAS KAMM/AFP/Getty Images)
Trump Administration

President Donald Trump announced late on June 2 that White House Council of Economic Advisers (CEA) Chairman Kevin Hassett will be leaving his post in the near future.

Trump praised the work of Hassett, whom he nominated in 2017, and said he would be naming his “talented” replacement soon, without elaborating further. Hassett previously served as a scholar of fiscal policy at the conservative American Enterprise Institute think tank.

“Kevin Hassett, who has done such a great job for me and the Administration, will be leaving shortly,” Trump said on Twitter, as he flew to Europe for a series of state visits. “His very talented replacement will be named as soon as I get back to the U.S.”

Kevin Hassett, who has done such a great job for me and the Administration, will be leaving shortly. His very talented replacement will be named as soon as I get back to the U.S. I want to thank Kevin for all he has done – he is a true friend!

“I want to thank Kevin for all he has done – he is a true friend!” Trump added.

The exit comes amid trade tensions between the United States and Mexico, resulting from the current migrant crisis at the border. On May 30, Trump announced a 5 percent tariff on all goods from Mexico, which will begin June 10 and gradually increase to as much as 25 percent if Mexico fails to stop the throngs of illegal immigrants using the country to reach U.S. soil.

Hassett, in a June 3 interview with CNBC, said his departure had nothing to do with the president’s newly imposed tariffs. Trump has said that Mexico hasn’t done enough to stem the flow of illegal immigrants crossing the border, most of whom are passing through Mexico from Central American countries.

“This is something that’s been in the works for a little while,” Hassett told CNBC. “If you look at the history of the CEA, it’s very normal for the chair to move on after two years.”

In his White House post, Hassett worked with Trump’s senior adviser and son-in-law, Jared Kushner, on a proposed immigration plan that the president unveiled in May, and also backed a U.S. move to end waivers of sanctions for countries that buy Iranian oil. The chairman of the CEA serves as the chief economic adviser to the administration as a whole.

Hassett told the network he would be leaving at the end of June, noting that a part of the reason for his departure was out of “respect for the institution”; he also said he wanted to spend more time with his family.

Mexican officials, meanwhile, came to Washington on June 3 to discuss the tariffs and border situation. Days ago, Mexican President Andres Manuel López Obrador hinted that his country could tighten migration controls in a bid to avoid the new tariffs.

“I think that the president is dealing with an immigration crisis,” Hassett said. “They have a list of things that the Mexicans can do … and I’m heartened to see they’re in town to talk about it.”

Hassett declined to comment to CNBC about whether he believes the two countries can reach a deal by the June 10 deadline.

Mexican Foreign Minister Marcelo Ebrard said previously he would lead a major delegation to meet with U.S. officials in Washington on June 5. Ebrard will be accompanied by deputy foreign minister for North America Jesus Seade; Secretary of State Mike Pompeo will lead the U.S. delegation.