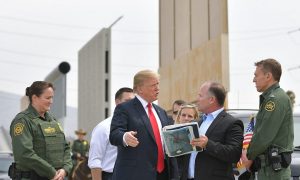 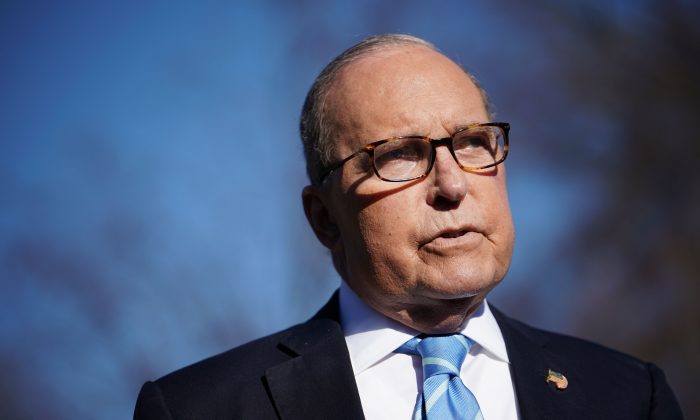 Director of the National Economic Council Larry Kudlow speaks to reporters outside the White House in Washington on Dec. 3, 2018. (MANDEL NGAN/AFP/Getty Images)
Politics

White House economic adviser Larry Kudlow revealed on March 10 that President Donald Trump is proposing a roughly “5 percent across the board” cut in domestic spending as part of his 2020 budget, and, at the same time, will ask Congress for an additional $8.6 billion for the U.S.–Mexico border wall.

“It will be a tough budget,” Kudlow said in an interview on Fox News Sunday. “We’re going to do our own caps this year and I think it’s long overdue. Some of these recent budget deals have not been favorable towards spending.”
When asked if there will be another budget fight over the wall, Kudlow acknowledged that it could happen. “I suppose there will be,” he said.

The deadline for Congress to approve funding for the 2020 fiscal year is Oct. 1. If the funding fails to pass, it could lead to another government shutdown.

He said the budget proposal will link the 2017 tax cut bill with the domestic spending cuts in order to spur on growth. Kudlow said Trump’s 2020 budget plan will keep the 3 percent tax cuts that were implemented in 2018.

“If you want to deal with budget deficits, you’ve got rapid growth, which means keep the tax cuts in place,” he said. “We believe the 3 percent tax rates of 2018 will continue in 2019 and beyond 2020 and so forth.”

In last year’s budget review, for fiscal 2019, the White House’s Office of Management and Budget (OMB) estimated that the federal deficit this fiscal year will be over $1.1 trillion.

Responding to the deficit, Kudlow said that good growth policies don’t necessarily have to “obsess” over it.

“My view and, I believe, the view of the administration, is we are going to point a steady glide path towards lower federal spending and federal borrowing as a share of the economy, as a share of GDP, that lowers the burden of the debt,” he said.

In the CBO’s monthly budget review for December 2018, it estimated that the federal budget deficit would hit $317 billion for the first quarter of fiscal 2019—$92 billion more than the deficit recorded during the same period last year.

But Kudlow said he doesn’t think the deficits are “a burden on the economy.”

“The economy is $20 trillion dollars. Household net worth today is about $100 trillion dollars… and again, in the long run, we do want to reduce the burden of spending and borrowing, absolutely, but always as a share of GDP—that’s the same approach we had during the Reagan years,” he said.