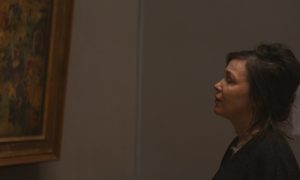 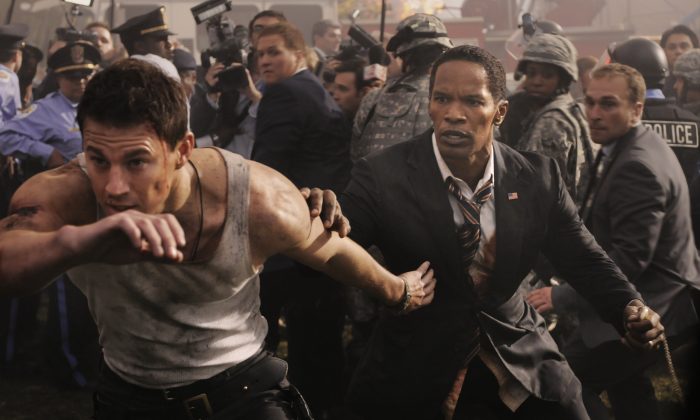 “White House Down” is a “Die Hard” movie NOT starring Bruce Willis.

Being the supercharged roller-coaster ride that it is, with the inherited pedigree, this film would have upheld the “Die Hard” legacy with honor and avoided the knock-off designation. Tatum’s name could have been John McClane Jr. instead of John Cale. Bruce Willis could have had a sweet cameo and come back for various grandfatherly roles in future “Die Hard” movies, such as babysitting.

Does “White House Down” really need the DH pedigree? No, but for those among us who feel a sense of unease if the TV remotes don’t line up precisely on the tabletop, it would have been satisfying to sort it neatly into a pre-existing pile. Anyway, enough with the griping—this is a seriously fun movie!

Jamie Foxx plays an Obama-like president (well, what other president would he be like?) who’s about to withdraw troops from the Middle East. But before you can say “hostile takeover by white supremacists,” some workman-looking guy wheels a bomb, easy as pie, smack into the middle of the White House. Just strolls right in. Don’t bother getting indignant about your insulted intelligence. Enjoy the ride.

He’s also in the doghouse with Agent Finnerty (Maggie Gyllenhaal), who interviews him for the Secret Service job. It turns out that they once dated in high school. She points out how he tends to never finish what he starts. Oops.

It doesn’t take long for Cale to strip down to the John McClane-in-work-mode tank top and start crawling around, listening in on swiped walkie-talkies, shooting swiped guns, and hiding in elevator shafts. These are a few of John McClane’s favorite things. The only thing John Cale doesn’t do is say “Yippie kai-yay.”

Anyway, you’ve got bunkers and tunnels! Numerous presidents get sworn in! Air Force One explodes!

Foxx and Tatum have the rapid-fire bantering and chemistry that one would expect of two Hollywood super-alphas. Best line: Upon hearing Cale say to his daughter that he’ll soon be a Secret Service agent, Foxx’s grinning President Sawyer whispers to Cale, “Stop lyin’ to children.”

Also, the reason you can tell Foxx’s character is not modeled on, say, George Washington, is because, while kicking one of the terrorists, he delivers the line, “Get your hands off my Jordans!” Now, see—even if Air Jordan basketball shoes had been around in the 1790s, George Washington would never have said that. Know why? Because basketball hadn’t been invented yet.

Movie reviewing is not generally rocket science, although it sometimes tries to approximate it. Often it’s as simple as observing the screening audience: The kid sitting next to this reviewer was clearly a poli-sci major, unmistakably from one of those politics-centric families that call the Secretary of State and Secretary of Defense the “Sec-State” and the “Sec-Def.”

He was all kinds of savvy and sophisticated, rubbing his hands in anticipation of some White House political whiz-bang in movie form. After a bit of well-deserved, derisive snorting at the utterly ridiculous plot lines, at the end of the movie, he was on the edge of his seat with his eyes bugging out. We all want a gripping, hero story to overcome logic every once in a while.