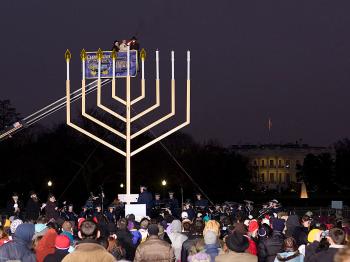 LIGHTING NATIONAL MENORAH: At dusk on Sunday, Dec. 13, the 'National Menorah' was lit. White House Chief of Staff Rahm Emanuel is being lifted in the cherry picker to reach the Hanukkah Menorah, which is said to be the largest in the world. (Lisa Fan/The Epoch Times)
US

Gary Feuerberg
View profile
Follow
biggersmaller
Print
WASHINGTON—The National Menorah was lit at nightfall Sunday during a ceremony on the Ellipse near the White House. One candle will be lit each night for a total of eight nights. This year the U.S. Air Force Band provided music.

Hanukkah is one of the principal holidays of the Jewish faith, and the key tradition of the holiday the lighting of a candelabra, called a menorah. Hanukkah in Hebrew means dedication or consecration.

White House Chief of Staff Rahm Emanuel, who is Jewish, lit the Hanukkah Menorah standing on a cherry picker. Weather was cold and rainy, but the rain let up just before the ceremony began, which some of the onlookers said they interpreted to mean the ceremony was blessed. This year, the Hanukkah (also spelled Chanukah) actually began last Friday evening at sundown.

The National Menorah Council Web site states: “In this way, we reaffirm the celebration of our freedom, inspired by the historic and present victory of right over might, light over darkness, and understanding and justice over intolerance and bigotry.”