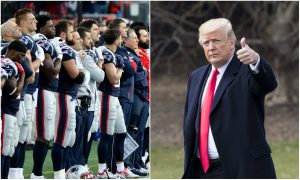 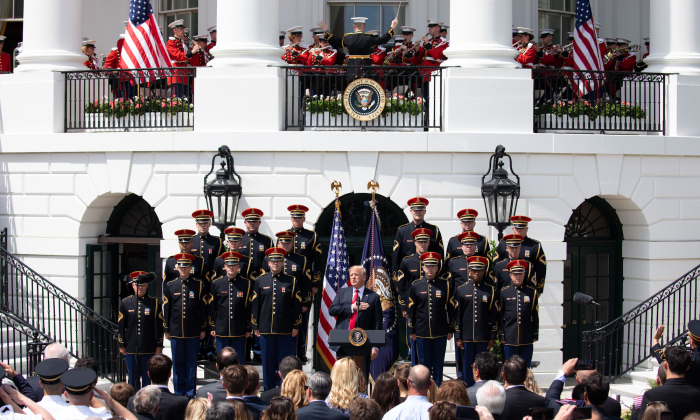 President Donald Trump sing along with the U.S. Army Chorus in front of the White House on June 5, 2018. (Samira Bouaou/Epoch Times)
Trump Presidency

President Donald Trump joined a crowd of Philadelphia Eagles fans outside the White House on June 5 for a modified event styled as a “Celebration of America.” The ceremony was altered after Trump canceled the Eagles’ invitation due to the team’s attempt to pull off what the White House called a “political stunt.”

Trump canceled the team’s invitation after learning that most of the planned attendees would not be coming to the White House. The president linked the apparent boycott to the disagreement between him and the players over the national anthem protests.

“Unfortunately, only a small number of players decided to come, and we canceled the event,” Trump wrote in a June 4 tweet. “Staying in the Locker Room for the playing of our National Anthem is as disrespectful to our country as kneeling. Sorry!”

The U.S. Marine Band and Army Chorus performed the national anthem as Trump stood with one hand over his heart and sang along.

“We love our country. We respect our flag, and we always proudly stand for the national anthem,” Trump said during a brief speech.

“We stand to honor our military and to honor our country, and to remember the fallen heroes who never made it back home. We stand to show our love for our fellow citizens and our magnificent Constitution. We stand to pay tribute to the incredible Americans who came before us and the heroic sacrifices they made.

“America is a great nation—a community, a family. And America is our home, and we love our home.”

The president said that the United States has “never done better than it’s doing right now” and pointed to the black and Hispanic unemployment figures, both of which have dropped to historic lows since he assumed office last year.

The crowd waved American flags and applauded. The chorus and band then performed “God Bless America,” with Trump singing along to parts of the song.

The Eagles notified the White House on May 31 that 81 people, including players, coaches, and management, would be attending a celebration of their Super Bowl victory there, according to White House press secretary Sarah Sanders. The Secret Service cleared everyone to attend the next day, but the team contacted the White House looking to reschedule the event for a date on which Trump had already announced an overseas trip.

The White House worked to adjust the event to accommodate a smaller group of players, but ended up disinviting the team after learning that only a “tiny handful” would attend.

“Unfortunately, the Eagles offered to send only a tiny handful of representatives, while making clear that the great majority of players would not attend the event, despite planning to be in D.C. today,” Sanders said in a statement. “In other words, the vast majority of the Eagles team decided to abandon their fans.”

Sanders accused the Eagles of pulling off a political stunt, saying that the team would not have waited until the last moment to pull most of the participants out of the event unless it was making a political statement. According to Sanders, the Eagles offered to reschedule for a date when Trump would be holding a historic meeting with North Korean leader Kim Jong Un in Singapore.

The Eagles’ owner, Jeffrey Lurie, and head coach, Doug Peterson, were set to attend before the event was canceled. The total number of attendees reportedly shrunk to less than 10 before the White House disinvited the team. Four players had publicly stated they would not be attending.

“They disagree with their president because he insists that they proudly stand for the national anthem, hand on heart, in honor of the great men and women of our military and the people of our country,” Trump said in a statement.

The Eagles players did not kneel during the national anthem last season, but several protested by holding their fists in the air.

Last year, Trump harshly criticized NFL players who knelt during the performance of the national anthem in protest of perceived oppression. The president said that players who disrespect the anthem should be fired.

Trump’s comments triggered a wave of national anthem protests. The protests subsided after substantial backlash from fans who were unhappy to see American values disrespected and were irked by political drama encroaching on an event meant for entertainment. Many fans immediately left stadiums when players protested or refused to watch the games on TV.

Most team owners sided with the players, but after seeing television ratings slip, attempted to coalesce around a solution that would keep both the players and fans happy. NFL Commissioner Roger Goodell announced that solution late last month, saying that players would be required to stand during the anthem, but have the option to remain in the locker room during the performance.

“It was unfortunate that on-field protests created a false perception among many that thousands of NFL players were unpatriotic,” Goodell said in a statement. “This is not and was never the case.”

The first player to refuse to stand during the national anthem was Colin Kaepernick. He said he refused to stand because the United States “oppresses black people and people of color.”

Kaepernick remains unsigned after leaving his team more than a year ago.