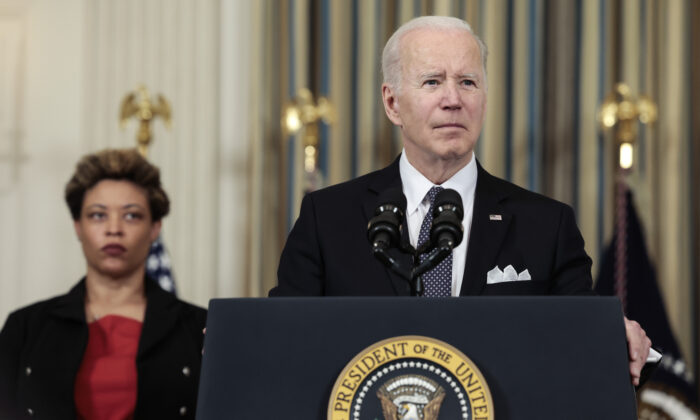 President Joe Biden speaks alongside Director of the Office of Management and Budget Shalanda Young as he introduces his budget request for fiscal year 2023 in the State Dining Room of the White House on March 28, 2022. (Anna Moneymaker/Getty Images)
Executive Branch

President Joe Biden’s administration is targeting U.S. corporate stock buybacks in his 2023 budget plan announced on March 28 in an effort to discourage businesses from using profits to “enrich executives.”

Companies buying back their own shares on the open market is not a new phenomenon, with a record $319 billion of new share buybacks having been authorized so far this year, according to Goldman Sachs data.

At the same time last year, there were $267 billion in buybacks authorized.

However, under Biden’s new legislation, company executives would be required to hold on to company shares for several years after receiving them and would be prohibited from selling in the years after a stock buyback.

Details regarding how long the prohibition of selling would last were not available in the budget plan but the freeze may last up to three years, according to a Monday DealBook report.

Stock buybacks benefit companies by allowing them to raise the share price, boost demand, and create value for shareholders. Proponents argue they are also a good way for companies to utilize excess cash.

However, critics, including some Democratic lawmakers, say the practice allows the company’s wealthiest executives to make a quick profit from artificially boosted stock prices and reroute funds that could be used to further develop the business, such as raising workers’ pay or hiring more employees.

A 2018 analysis conducted by the U.S. Securities and Exchange Commission found that in half of the buybacks that were studied, “at least one executive sold shares within a month of a buyback announcement” and that “twice as many companies have insiders selling in the eight days after a buyback announcement as sell on an ordinary day.”

The White House says the legislation would “align executives’ interests with the long-term interests of shareholders, workers, and the economy” according to the draft budget plan (pdf).

“This would discourage corporations from using profits to repurchase stock and enrich executives, rather than investing in long-term growth and innovation,” the administration said of the proposed restrictions.

It is not yet clear if the draft legislation will pass through Congress, although it appears to have wide support from lawmakers.

The White House last year proposed a 1 percent surcharge on corporate stock buybacks. However, the latest proposal goes a step further by putting time limits on when executives can sell their shares.

“The budget I am releasing today sends a clear message that we value fiscal responsibility, safety, and security at home and around the world, and the investments needed to continue our equitable growth and build a better America,” Biden said in a statement unveiling the budget plan on Monday.

“All told, it is a budget that includes historic deficit reduction, historic investments in our security at home and abroad, and an unprecedented commitment to building an economy where everyone has a chance to succeed,” Biden said.

The senators said Biden’s budget plan calls for “addressing the misaligned incentives that encourage excessive stock buybacks, often at the expense of investments in workers, innovation, and communities” and called on Congress to address the issue.

“I don’t see the actual economic problem that this is solving,” Pethokoukis told CNBC. “I think there’s very little evidence that buybacks are somehow negatively impacting corporate decision-making, that it’s making them more short-term oriented … So I tend to think this is more about making the numbers work in this budget and signaling priorities rather than addressing an actual economic problem afflicting America. “