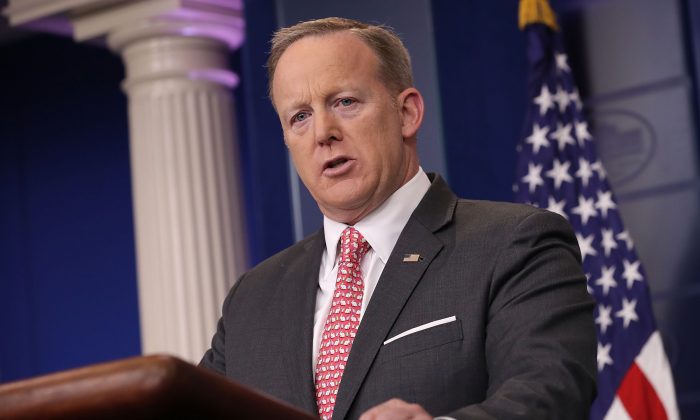 WASHINGTON—The White House is aware of “potential negative impacts” from a review ordered by President Donald Trump of whether lifting sanctions through the Iran nuclear deal was in U.S. national security interests, his spokesman said on Wednesday.

Asked at a news briefing if Trump had decided to pull out of the 2015 deal, WhiteHouse spokesman Sean Spicer said the 90-day inter-agency review, announced on Tuesday, would make recommendations on the path forward.

The agreement between Iran and six world powers, negotiated during Barack Obama’s presidency, placed limitations on Iran’s nuclear program in exchange for lifting international oil and financial sanctions against Iran.

During his presidential campaign, Trump called the agreement “the worst deal ever negotiated.”

Iranian Supreme Leader Ayatollah Khamenei warned in November that Tehran would retaliate if the United States breached the nuclear agreement.

Asked if the White House was concerned that tougher sanctions on Iran could motivate it to violate the agreement, Spicer said: “We’re well aware of any potential negative impacts that an action could have.

“Regardless whether it’s an economic, political or military action you always weigh those kinds of actions.”

US: Iran Complies With Nuke Deal but Orders Review on Lifting Sanctions

When Spicer was questioned whether Trump was concerned Iran was cheating on the deal, he said “That’s why he’s asking for this review. If he didn’t, if he thought everything was fine he would’ve allowed this to move forward.”

“Part of the review … is to determine where Iran is in compliance with the deal and to make recommendations to the president on the path forward,” Spicer said.

In a letter to U.S. House of Representatives Speaker Paul Ryan on Tuesday, Secretary of State Rex Tillerson said Iran remained compliant with the 2015 deal, but there were concerns about its role as a state sponsor of terrorism.

Tillerson said Trump had ordered a review led by the National Security Council to evaluate whether suspension of sanctions related to the nuclear deal was “vital to the national security interests of the United States.”