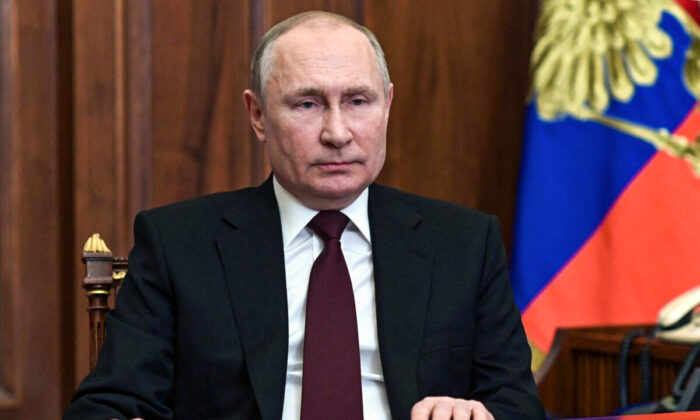 Russian President Vladimir Putin speaks during his address to the nation at the Kremlin in Moscow on Feb. 21, 2022. (Alexey Nikolsky/Sputnik/AFP via Getty Images)
Executive Branch

US says more measures to come
By Nick Ciolino

The White House has announced sanctions in response to Russian President Vladimir Putin’s move to recognize the independent sovereignty of two regions in Eastern Ukraine.

In a televised address Monday, Putin challenged Ukrainian statehood, saying the country was created by Bolshevik, communist Russia after the revolution of 1917. He then went on to say he will “recognize the independence and sovereignty of the Donetsk People’s Republic and the Luhansk People’s Republic”—two areas in Ukraine’s Donbas region held by Russian-backed separatist groups.

“I ask the Federal Assembly of the Russian Federation to support this decision, and then to ratify the treaties of friendship and mutual assistance with individual republics. These two documents will be prepared and signed in the very near future,” said Putin. “And from those who seized and hold power in Kyiv, we demand an immediate cessation of hostilities.”

Shortly after making the speech, Putin signed a decree authorizing troops to move into the two breakaway regions.

Russia continues to have more than 150,000 troops along Ukraine’s border and in neighboring Belarus. It’s not clear the status, size, and scope of any troop mobilization into the contested regions. Ukraine says that Russian troops have been present in the Donbas for many years, although officially, Russia has denied the presence of “regular armed forces” in the region.

Washington responded to Putin’s speech with a statement issued by White House press secretary Jen Psaki saying Putin’s move had been “anticipated” and announcing immediate sanctions against the two regions of Ukraine through an executive order from President Joe Biden.

The statement says Biden’s order will “prohibit new investment, trade, and financing by U.S. persons to, from, or in the so-called DNR and LNR regions of Ukraine. This E.O. will also provide authority to impose sanctions on any person determined to operate in those areas of Ukraine.”

She also made clear the steps taken Monday by the United States are separate from a proposed sanctions package against Russia should it invade Ukraine.

U.S. officials have coordinated with European allies to make the threat of “severe” sanctions if Russia moves to invade. Officials have said these include sanctions against major Russian financial systems, individual members of Putin’s inner circle, and stopping the Nord Stream 2 pipeline from Russia to Germany from going forward.

The United States has said it’s committed to pursuing a path of diplomacy with Russia. The White House announced Sunday Biden had agreed “in principle” to meet with Putin provided he did not move to invade Ukraine. It’s unclear if Russia’s actions Monday would alter U.S. considerations for diplomacy or plans for a leader-to-leader meeting.

Russia annexed Ukraine’s Crimean Peninsula in 2014 and the Donbas region has since seen violence between the Ukrainian government and separatist groups that has taken more than 14,000 lives.